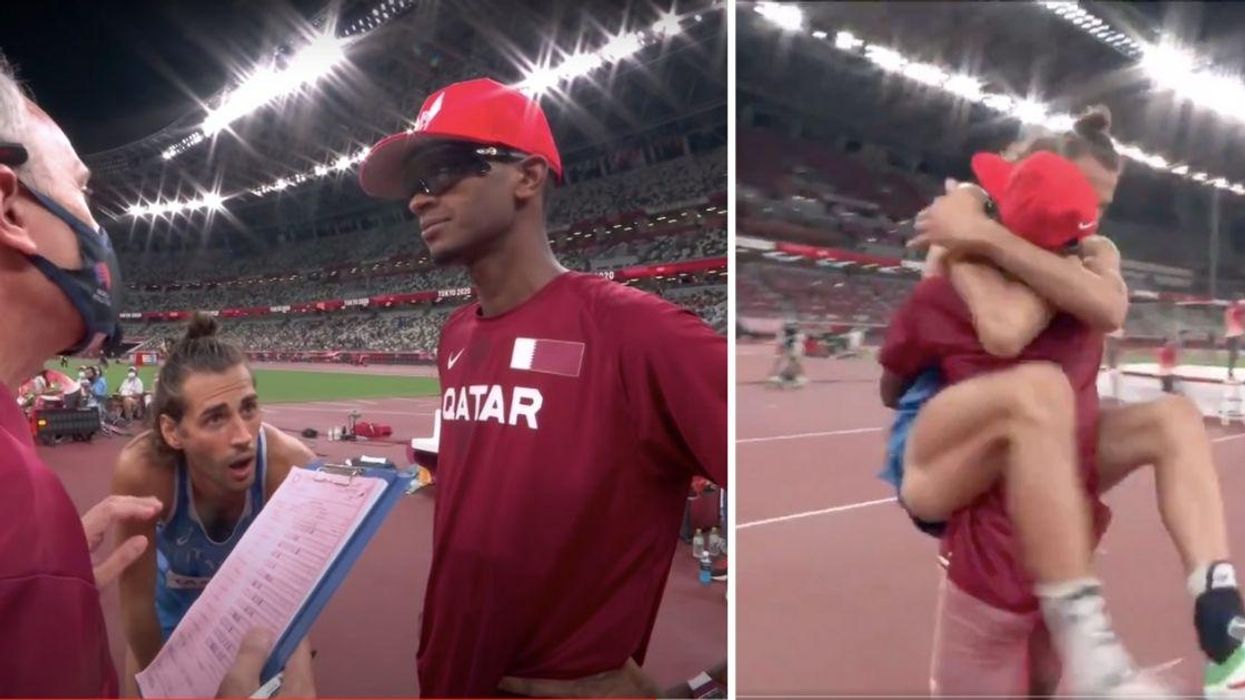 This article originally appeared on 08.02.21

When Qatar’s Mutaz Essa Barshim and Italy’s Gianmarco Tamberi both landed their high jumps at 2.37 meters, they were in the battle for Olympic gold. But when both jumpers missed the next mark—the Olympic record of 2.39 meters—three times each, they were officially tied for first place.

In such a tie, the athletes would usually do a “jump-off” to determine who wins gold and who wins silver. But as the official began to explain the options to Barshim and Tamberi, Barshim asked, “Can we have two golds?”

“It’s possible,” the official responded. “It depends, if you both decide…” And before he’d even told them how sharing the gold would work, the two jumpers looked at each other, nodded, and then launched into a wholesome and joyful celebration guaranteed to bring a smile to your face.

(If you are unable to view the video above, check it out on NBC’s YouTube channel here.)

The two jumpers have been competing against one another for more than a decade and are friends on and off the field, so getting to share the gold is a win-win—literally—for both of them. It’s also a historic choice. According to the BBC, the last time competing track and field Olympians shared the gold medal podium was in 1912.

The friendship and camaraderie between the two athletes are palpable and their immediate decision to share the gold truly embodies the Olympic spirit.

“I look at him, he looks at me, and we know it,” Barshim said, according to the CBC. “We just look at each other and we know, that is it, it is done. There is no need.”

“He is one of my best friends,” he added, “not only on the track, but outside the track. We work together. This is a dream come true. It is the true spirit, the sportsman spirit, and we are here delivering this message.”

Barshim was the silver medalist in the event in the Rio 2016 Olympics, and Tamberi suffered a career-threatening injury prior to those games, which took him out of medal contention.

“After my injuries, I just wanted to come back,” Tamberi told CNN. “But now I have this gold, it’s incredible. I dreamed of this so many times. I was told in 2016 just before Rio, there was a risk I wouldn’t be able to compete anymore. It’s been a long journey.”

What a beautiful display of sportsmanship, excellence, and genuine human connection. This is what the Olympics are all about. Love to see it.