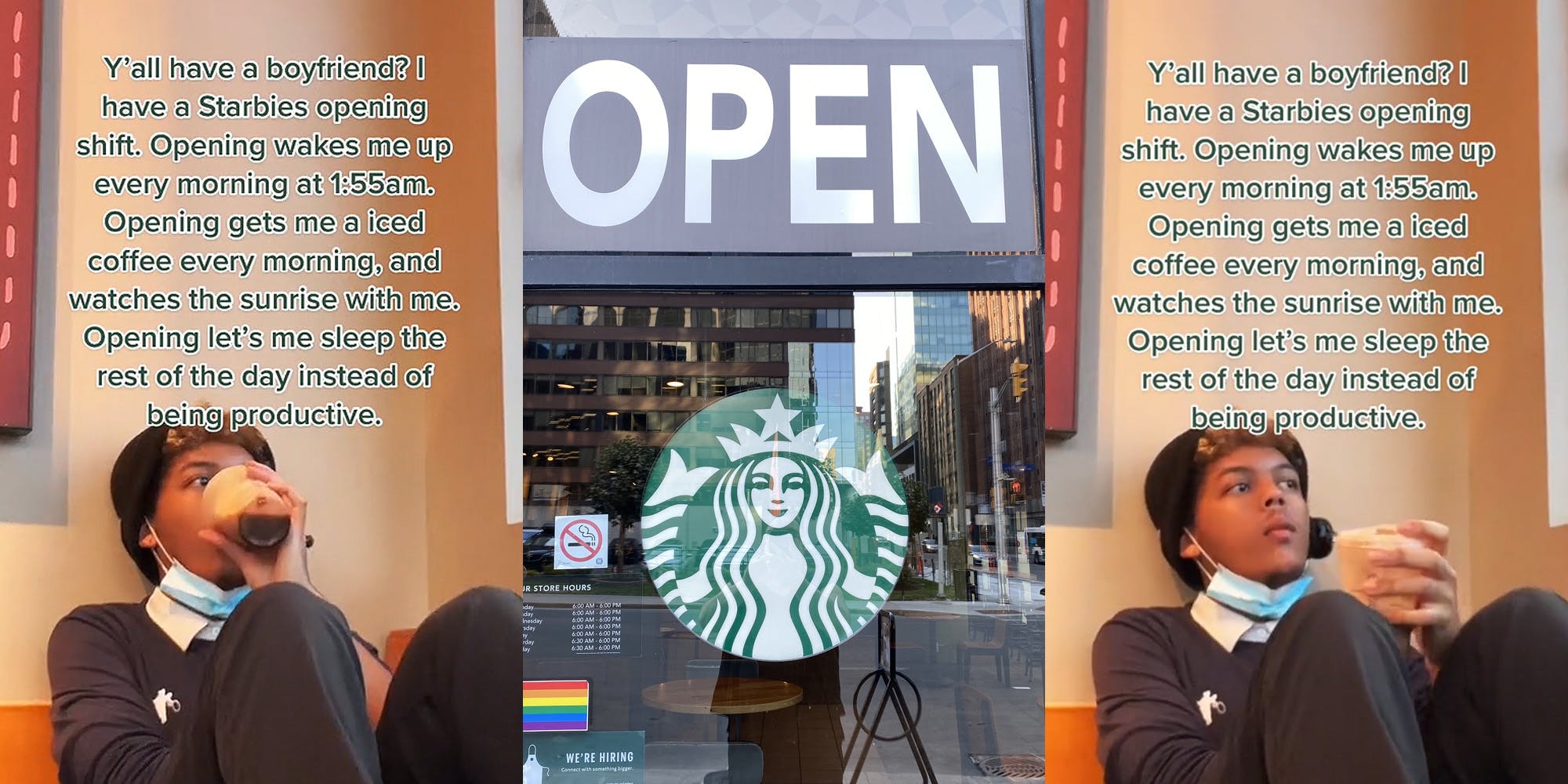 A Starbucks employee went viral on TikTok sharing his experience of waking up early for work—as fellow baristas chimed in about the opening-shift stressors.

The seven-second clip only features the TikToker, Josiah Bushner (@exposiejosiept2), leaning against a wall while sipping his iced coffee. The overlay reads, “Y’all have a boyfriend? I have a Starbies opening shift. Opening wakes me up every morning at 1:55am. Opening gets me a iced coffee every morning, and watches the sunrise with me. Opening let’s me sleep the rest of the day instead of being productive.” The video includes hashtags about barista life while “Norman Fucking Rockwell” by Lana Del Rey plays in the background.

The video has been viewed over 131,000 times since it was posted on July 27. Many current and former Starbucks employees in the comments resonated with the video.

@exposiejosiept2 Waking up at 1:55am to get to work at 2:30am since we open at 3am #baristalife #singlelife #gay #starbies ♬ norman fucking rockwell – L

“we’re gonna start opening at 5 instead of 6,” a third commented.

“not me crying bc our hours changed so i have to be at the store for 4 instead of 430,” a fourth wrote.

Bushner answered in the comments, saying, “We’re heading towards being a 24hr drive thru store! We’ve been slowly opening 30 mins earlier or closing 30 mins later.”

Apparently, many in the comments were wondering the same thing. Why are some Starbucks turning into 24-hour establishments and who would go there? Bushner posted a second video, answering the question. The video features only Bushner in his car, eating a sandwich as he responds.

“Basically, it depends on your location. Mine happens to be right next to a hospital so we actually do get a line at 3am,” he continues, “I think the whole point of 24 hours is so we can get a lot of our deep cleaning done and you know, there are people who like getting, like, after midnight snacks.”

In addition, Bushner expressed his thoughts about working early and closing, stating he enjoys both of the roles. He seems to prefer opening since the shift goes by faster and highly recommends it.

The Daily Dot reached out to Josiah Bushner via TikTok comment.