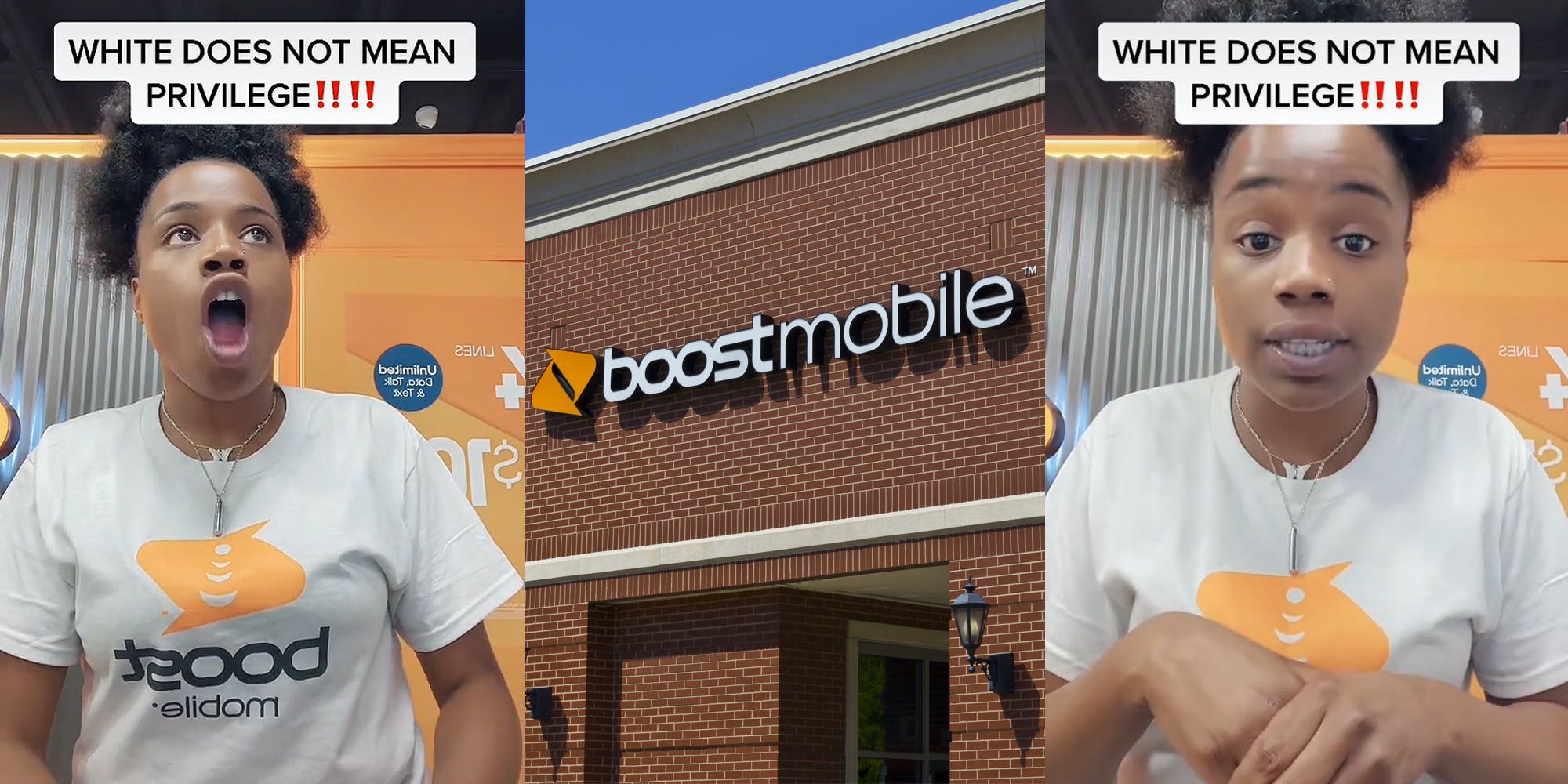 In a viral TikTok video, a Boost Mobile employee shares an unpleasant encounter with a customer who got upset because she didn’t want to wait in line to be serviced. She also claims the customer’s husband, who later came in to apologize, offered a strange racial comment as an excuse.

The TikToker Alima Allums (@lamuzeenda) wrote in the text overlay, “White does not mean privilege” and included the hashtags “#whiteisnotright #waityourturn” and “#racism” in the caption.

Her video has received over 41,000 views since it was shared Friday.

Allums claims that her store has been incredibly busy that day. While she was already helping four other customers, she says the woman walked in.

“I’m like, ‘Hey how you doing, gimme one second, I’ll be right with you,'” Allums says of greeting the customer.

However, she says the customer responded, “Why would you say hello to me if you can’t talk to me now?”

The Boost Mobile worker rhetorically asks, “Who the fu-?” expressing her shock and disdain for the customer’s attitude. Instead of getting into it with the woman, Allums says that she elected to continue to help the current customer she was servicing, ignoring the woman’s snide remark.

While Allums was helping another person who was standing in line, she says the woman walked up to the side of the register. “Can you help me?” she asked, bypassing the other folks in line.

“Ma’am, I have four other people in front of you I will get to you when I can,” Allums recalls responding.

“Then what was the point of you talking to me?” Allums says the customer asked.

“I was greeting you because you walked into my store,” the TikToker explains, saying that the irate woman stood there anxiously, tapping their foot as she assisted other customers.

Allums then informed the angry customer that there was an alternative method to help her pay her bill, but she would have to wait to be serviced. She went on to say that while it’s fine for her to pay her bill in-store, being disrespectful while doing so wasn’t appreciated.

“She’s like, ‘Well, can you just pay my bill?'” the worker recalls the woman’s insistence.

“No, I cannot pay your bill,” Allums responded. “As a matter of fact, I can no longer speak to you. Bye.”

After explaining their interaction, the TikToker adds that the woman was white, and her husband walked inside shortly afterward, apologizing for her behavior. “Excuse her, she was having a bad day,” Allums claims the man told her, describing his wife’s bad experience at the food court.

The worker then told the man that her poor food court experience “had nothing to do with” her or Boost Mobile, arguing that she needs to speak to people with respect.

While he said he “totally understand[s],” Allums claims he added that his wife wasn’t used to “interacting with people…like you.”

“I’m confused she’s not from America?” the TikToker questioned. “[…] She ain’t in this mall shopping? Because there’s a lot of brown people walking in this mall.”

“No, that’s not what I meant. We don’t really have stores like this,” she claims the man explained, but the TikToker wasn’t buying the man’s comment.

Her post inspired a variety of different comments from TikTokers. Some remarked that they understood the woman not wanting to pay online and that both Alima and the customer were being rude. Others said that even if Alima didn’t greet the woman she would’ve found a reason to complain or being a miserable mood. And then some couldn’t wrap their heads around why someone would want to physically go to the mall to pay a bill in the first place.

In the comments, several users called out the woman’s behavior.

“And if u didnt greet she still woulda had something to say. Ppl are so miserable,” one viewer wrote.

“You acknowledged her and that still was not good enough!” another added.

Similar to Allums, many viewers weren’t buying the husband’s excuse either.

“She’s not use to interacting with human?” one user questioned.

“I think we all know she meant by ‘people like you’ also you handled it right,” another said.

Customer service is often strenuous work. Globe News Wire reported that 81% of surveyed employees who work in customer-service-related positions have said they would benefit from mental health resources offered through the workplace to help deal with the stresses of their jobs.

Additionally, of the 800 workers involved in the study, more than half of them have suggested additional job duties, like “upselling and cross-selling” have become a standardized part of their daily workflows and only added more pressure. This makes their position a quasi-customer relations/sales role, which can only lead to more frustration on the customer’s end as they are looking for a solution to their problem, not spend more money.

In a follow-up video, Allums said the woman returned to the store to pay her bill, and she “humbly apologized” for being disrespectful the previous day and even gave her a tip.

“White privilege don’t work for me,” Allums says in the video. “Why? Because I was taught how to handle it.”

The Daily Dot has reached out to Allums via TikTok comment.