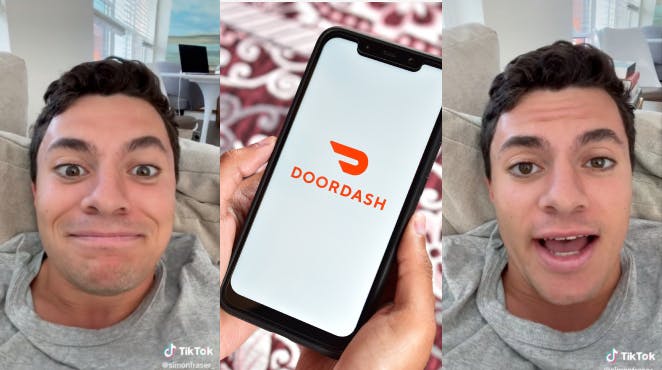 A DoorDash driver shared some unusual financial advice on TikTok: order DoorDash as a customer and deliver it to yourself as a delivery driver.

The dasher, named Simon Fraser on TikTok (@simonfraser_), recently posted a video on the app explaining his “life hack.” As of Wednesday, the video went viral with about 232,000 views on TikTok.

In the video, Fraser explains that he lives above a restaurant. He also has DashPass, a DoorDash subscription service that offers unlimited free deliveries on orders over $12.

Fraser says he orders DoorDash from the restaurant below him and then quickly logs in to his Dasher app and accepts his own order. Then, he walks downstairs to pick up the order. And of course, as a dasher, he gets paid to pick up the order. Plus, he doesn’t have to pay for delivery because of his DashPass.

“And then I give myself a big tip,” Fraser says in the video.

“Free financial advice,” he added in the video’s caption.

Some viewers appreciated the advice.

“Yes this is better than 99.9% of the financial advice on this app,” one viewer commented on the video.

Other viewers were skeptical, though, and pointed out potential flaws in Fraser’s plan. Some said it would be more financially smart to just order food directly from the restaurant.

“Wouldn’t it just be cheaper to not pay the Doordash prices for the food?” one user asked.

A third commented, “Wouldn’t it be cheaper to order directly from the restaurant. I find door dash has too many fees added other than delivery.”

Several other users questioned whether Fraser would have to pay taxes on the “big tip” he gives himself after picking up his food.

One commenter discouraged him from tipping himself through the Dasher app.

“Don’t tip yourself on the app! You have to pay tax on that income. Tip yourself in cash if you must,” they wrote.