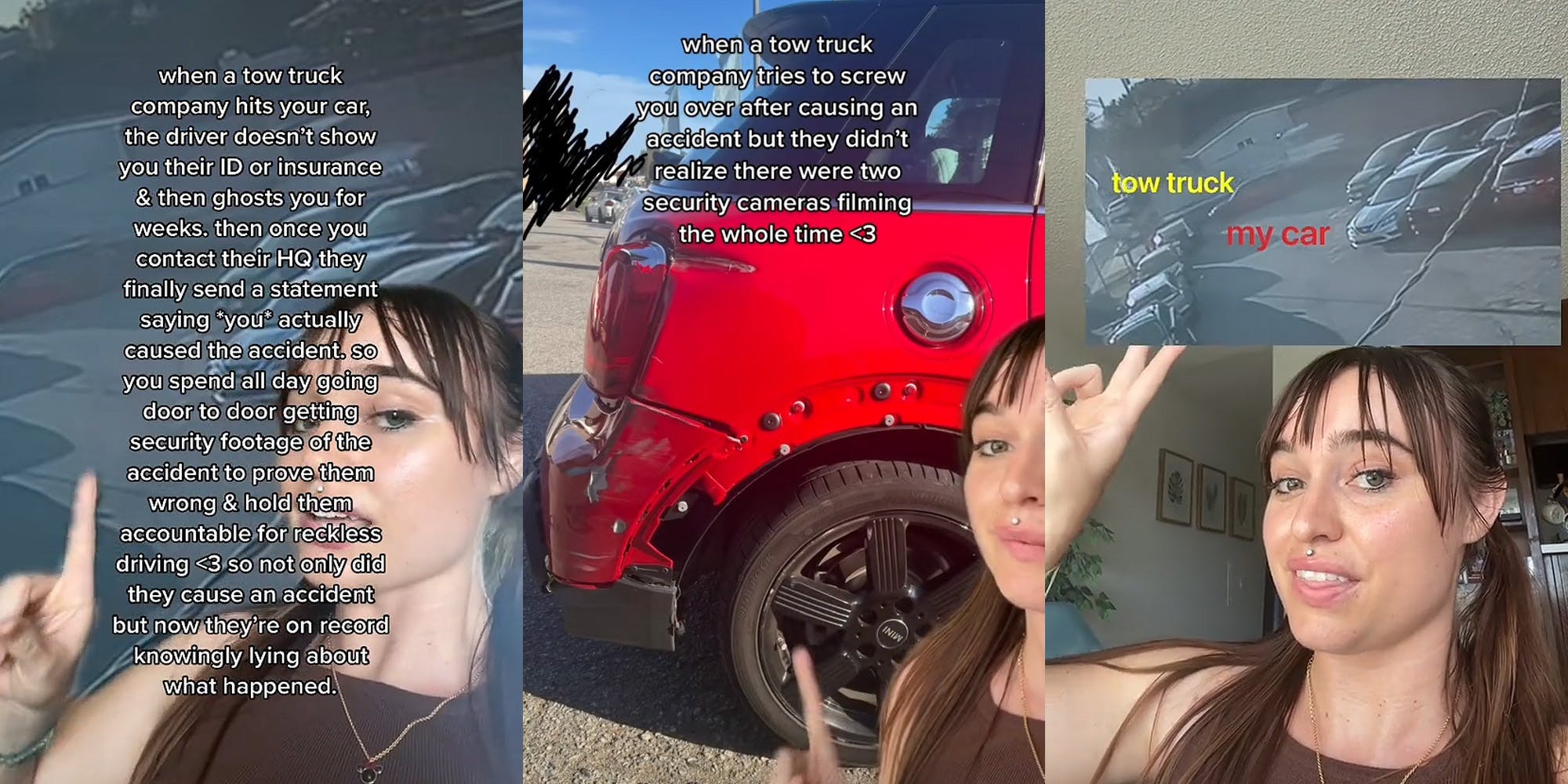 In a viral video garnering over 3.1 million views, TikToker Coco Mocoe (@cocomocoe) claimed a tow truck hit her car—and tried to blame the accident on her.

What the tow truck company didn’t know was that Coco had receipts.

“When a tow truck company hits your car, the driver doesn’t show you their ID or insurance and then ghosts you for weeks. Then once you contact their HQ they finally send a statement saying you actually caused the accident,” the overlay text on the video said.

Coco showed a photo of her red Mini Cooper and the damage caused by the tow truck.

“So you spend all day going door-to-door getting security footage of the accident to prove them wrong and hold them accountable for reckless driving. So not only did they cause an accident but now they’re on record knowingly lying about what happened,” the overlay text continued.

In the comments section, users share similar experiences and advice on how to prevent the situation from happening.

“This happens way too often. A big rig truck hit my brother and then they flipped it on him and said he hit them lol,” one user said.

“I highly recommend getting a dash cam. It will save you from stuff like this,” another commented.

“Towing companies are the biggest scammers. I hate them,” a third user said.

In an updated comment shared in the comments section, Coco said  “I got TWO videos from different angles. They messed with the wrong one.”

In a second video, the creator shared footage of the accident.

“It was [like] finding a needle in a haystack…except I got lucky & found two,” the caption said.

“When a tow truck company tries to screw you over after causing an accident but they didn’t realize there were two security cameras filming the whole time,” the overlay text on the video said.

Coco revealed that the tow truck hit her car while it was not moving, and the company claimed that her car bumped into the tow truck as she was pulling out onto Pacific Coast Highway.

However, in an email to the Daily Dot, Coco said she will not reveal the name of the towing company as “the insurance claim doesn’t close until my repair appt in early September and I do want to respect everyone’s privacy for now.”

On her Instagram story, Coco said she now has a dash cam and was able to find security footage from a nearby apartment.