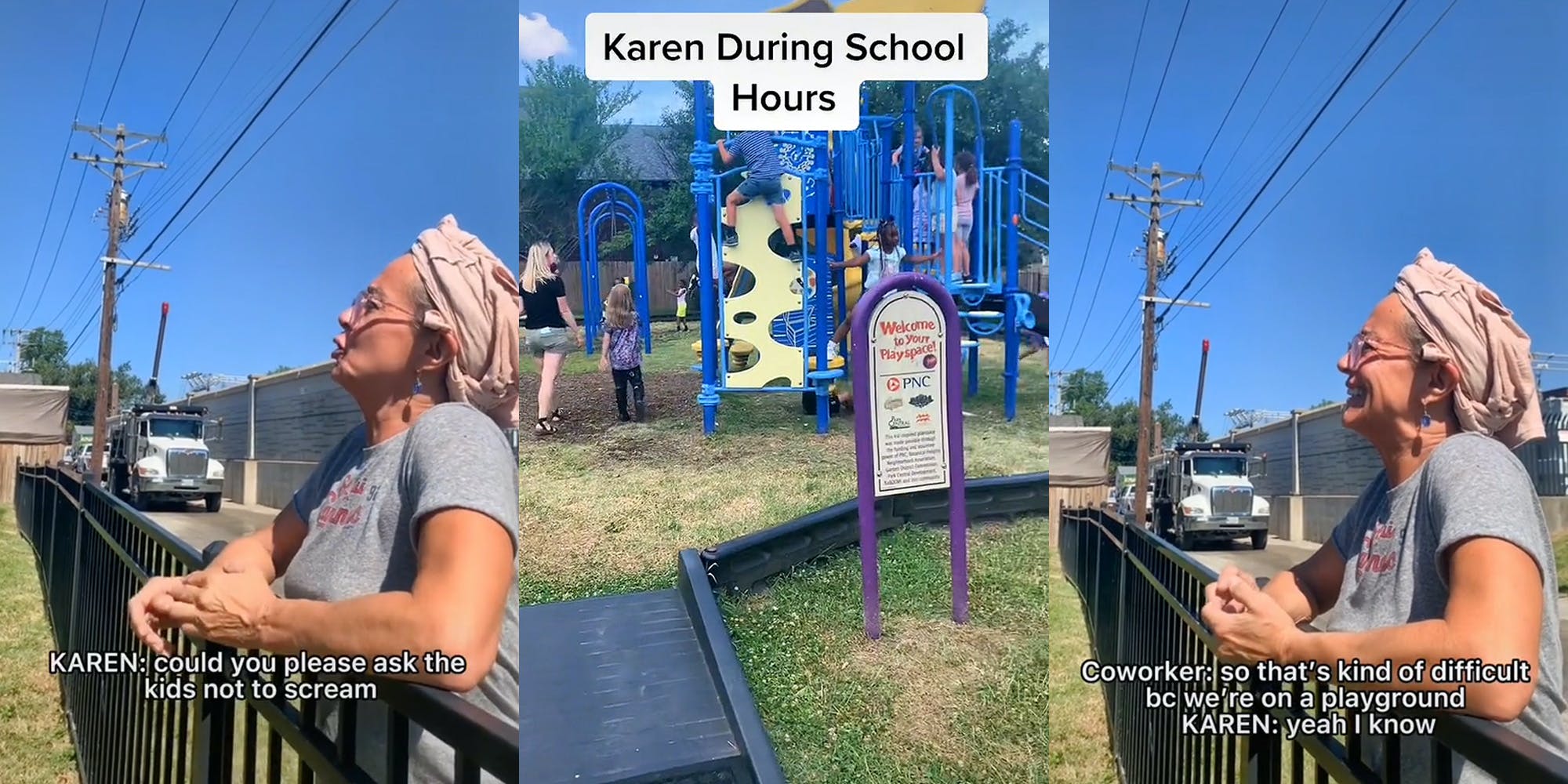 In a viral TikTok video, a woman living across from a playground confronts teachers about kids being too loud at the park.

The video, uploaded by Rachel (@rachels_galaxy), shows the ‘Karen’ coming over to the fence on the playground’s edge.

‘Y’all its a Karen outside our…” Rachel says as she walks toward the woman, but pauses as she gets closer. Her video received over 1.5 million views.

“Could you please ask the kids not to scream?” the ‘Karen’ asks with a smile on her face.

“That’s kind of difficult because we’re on a playground,” one of the teachers responds.

“But they’re kids, they’ll do what they’re told,” the woman argues. “If you just tell them nicely, they’ll probably listen.”

The teachers then repeat that the noise will be difficult to keep down, as it’s a park.

“I understand, but that’s not an excuse,” the woman responds. “We don’t really want these kids here to begin with. It’s a private park.”

In a follow-up video, Rachel explains that the school she works at doesn’t have a playground, so they just walked two minutes to the nearest park. She adds that the alleged “private” park is Botanical Heights Playground in St. Louis, Missouri.

The TikToker points to a 2012 article from the St. Louis Post-Dispatch, which reports that the playground was built by 200 volunteers in order for kids in the neighborhood to have access to outdoor spaces in which they can play.

“The people who live in this neighborhood either have new homes with tiny yards or they live in apartments and have no yards at all,” one of the Botanical Heights residents told the Post-Dispatch in 2012. “To allow my kids to play in a park, we have to load them in the car and drive to Tower Grove. You just can’t do that all the time. With this playground, they’ll have a safe place within walking distance to play and exercise.”

Rachel claims that the park was built for the community, which includes the students at her school.

“So that’s the tea,” Rachel continues. “This park is not private at all. This park was built by the community, for the community, because Botanical Heights neighborhood is a 15-minute walk from Tower Grove park.”

The TikToker also notes that she works at a Montessori school, an alternative to a traditional education in that it focuses on a child’s particular interests and often includes children across ages being taught or engaging in activities throughout the day in one room.

According to Rasmussen University, the Montessori method is “a specific child-centered method of education that involves child-led activities (referred to as ‘work’), classrooms with children of varying ages, and teachers who encourage independence among their pupils.”

As such, Rachel says her students need the time away from their singular classroom to play, especially her neurodivergent students.

“Some of my students are kids on the spectrum,” Rachel says. “They have ADHD, they have ADD, and it’s a Montesorri. So we sit in one class all day. We teach them all day… So for them to be able to have a playground or have a place to have fun is a blessing, especially when we have a lot of special needs students.”

In the comments of her initial video, viewers were outraged on behalf of Rachel and the children.

“Children playing is one of the best sounds, full of life. She should move,” one user wrote.

Others noted the irony of older generations wanting kids to get out and play, just not too loud.

“’All these kids these days stuck to their iPhones and video games, they don’t go outside.’ Also, ‘WE DON’T WANT YOUR KIDS PLAYING AT THE PARK,’” one user added.

Some viewers, however, had a very simple conclusion.

“Some people are just so miserable,” one commented.

The Daily Dot reached out to @rachels_galaxy via TikTok comment.