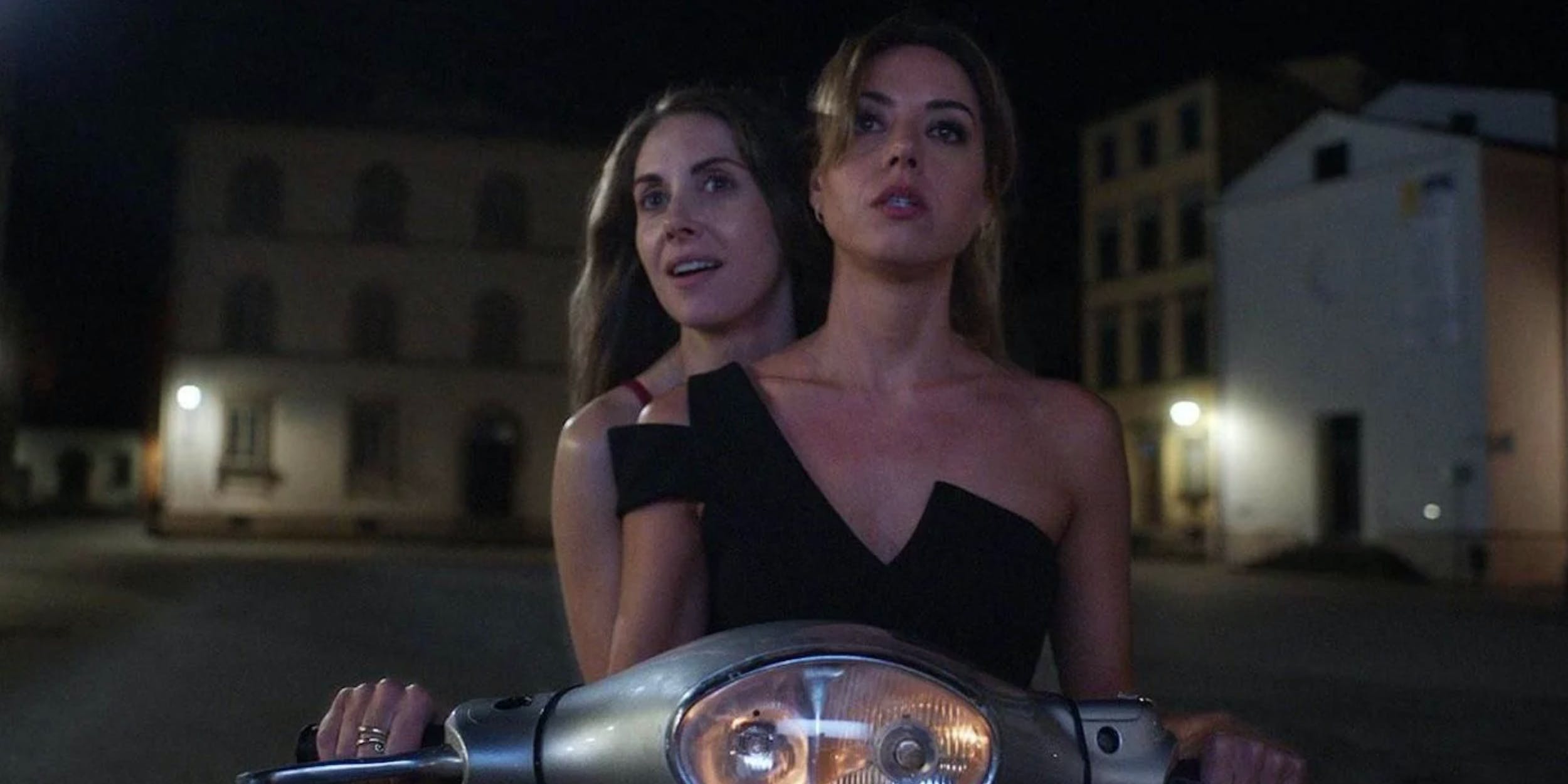 Co-written by director Jeff Baena and star Alison Brie, Spin Me Round follows a familiar Eat Pray Love-esque premise: Woman lives a boring life, goes to Europe, and learns how to live life to the fullest. While its wacky twists certainly set it apart, it fails to offer a consistent narrative.

Brie’s Amber works as a manager at Tuscan Grove, essentially an off-brand Olive Garden, and lives a relatively monotonous life. So, when she’s offered a free trip to Italy for a manager’s retreat program, she leaps at the opportunity. However, when Amber and the five other managers arrive at their getaway, things turn out to be different than expected. Their vacay spot turns out to be a worn-out hotel behind Tuscan Grove CEO Nick Martucci’s (Alessandro Nivola) lush villa in the Italian countryside, and their classes at the “institute” consist of “cooking” classes and movie days in a dingy conference room. The situation escalates when both Nick and his assistant Kat (Aubrey Plaza) take an interest in Amber, and as managers start disappearing, they find themselves looking for answers.

An all-star cast makes up Spin Me Round’s bizarre crew of managers, including Molly Shannon, Zach Woods, Tim Heidecker, and Debby Ryan, each with their own quirks that contribute to the film’s off-kilter humor. Shannon’s Deb spirals out of control (and into luxurious fashion) after the airline loses her bag, while Heidecker plays unusual weirdo Fran, and Woods’ obsessive Dana becomes an unlikely, attempted hero. Each of these characters bring bright moments that offer a chuckle, but their near disappearance from the second act, and subsequent return, creates a rift in the story.

Baena’s fifth directorial effort tries to blend the ensemble focus of his earlier works (Joshy, Life After Beth) with the more intimate, individual exploration of 2020’s Horse Girl, but Amber is too much of a blank slate for there to be enough substance in the latter attempts. Her characterization feels sanitized, and she isn’t given more to grapple with than a loosely explored self-protection complex and the strange antics around her. Plaza’s performance as the alluring Kat injects more excitement into Amber’s storyline—the pair’s brief escape to Luca nightlife presents one of the most promising moments of the film—but her character is thrown away in the third act in favor of a raucous twist ending.

The film’s attempt to play with genre for the sake of comedy falls flat, jumping from rom-com to detective thriller in a rather clunky fashion. Each moment in the narrative leads to a different conclusion, and sometimes no conclusion at all, resulting in a project that feels like trying to put pieces together from multiple different puzzles.

Spin Me Round’s premise is naturally funny, and its eccentric quips from a talented cast bring a dark humor to the film’s mild satirization of mid-price dining chain culture. However, the comedy seems confused about its own intentions, shifting its focus too many times and, as a result, fumbling its final punchline.