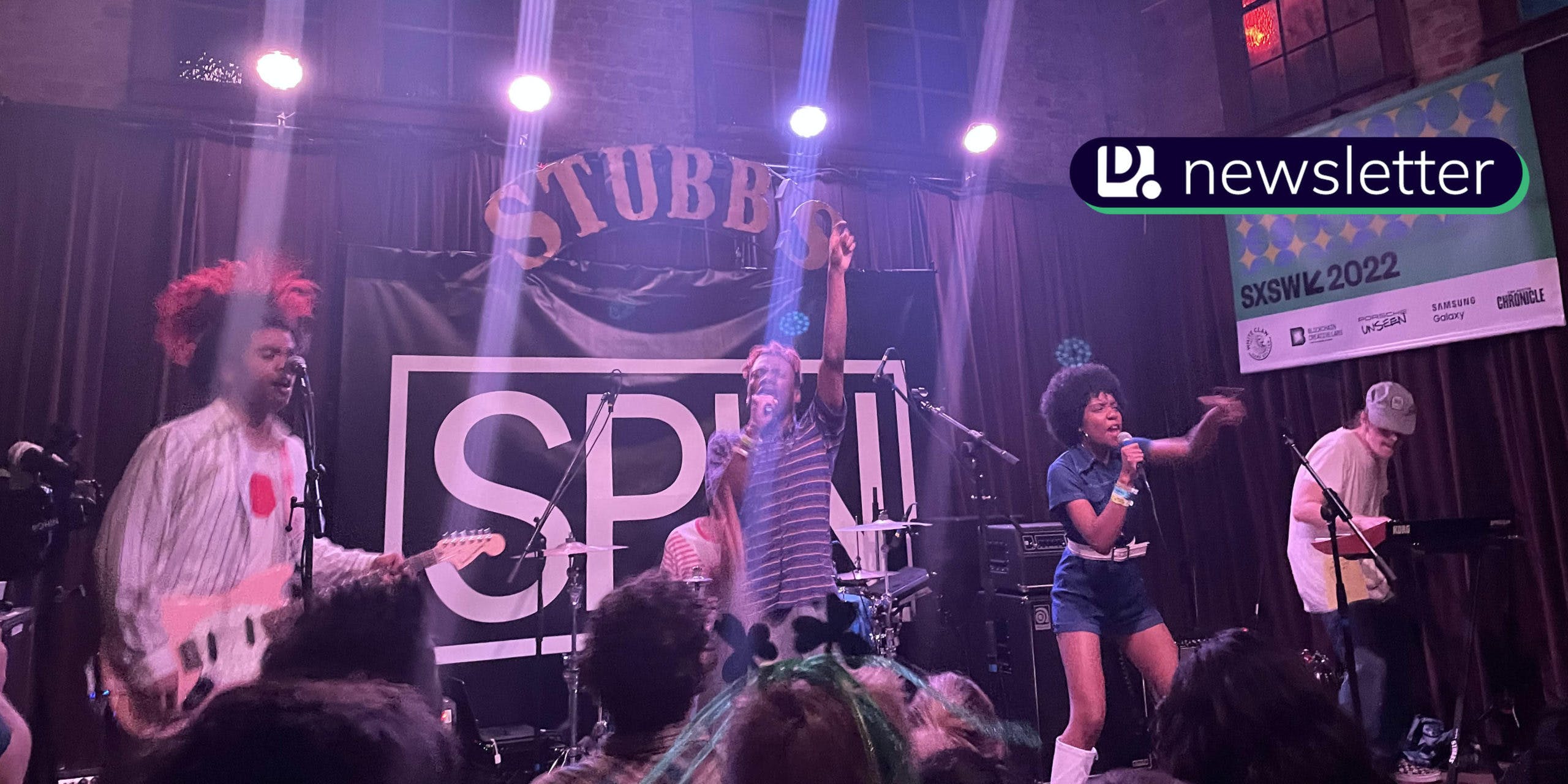 Sign up to receive Internet Insider, a daily newsletter from the Daily Dot, in your inbox.

South by Southwest is winding down, but our team of reporters are still on the ground hunting for the best stories.

Today we’ve got a column from Ramon Ramirez, our news director, about how NFTs are entering the music scene.

And as always, our reporters will share with you the weird, cool, and interesting things they are seeing at SXSW.

There are three core reasons why we can’t help but to side-eye non-fungible tokens (NFTs) as a new digital medium: They use an obscene amount of energy, they are expensive for artists to mint, and they are impenetrably confusing because, as Oneof.com CEO and Founder Lin Dai said Friday, we’re in the “first inning” of any new technology where it’s just “nerds building products for nerds.”

At SXSW, the music and tech industry are back-channeling about what to do with NFTs, these (mostly) digital files that come with certificates of authenticity. Yes, there are some very compelling potential advantages to minting NFTs if you’re a bedroom musician, as we learned Friday.

You can sell your rookie card as a standalone collectible that can appreciate over time. This is dark: Imagine saying you bought into Amy Winehouse at SXSW 2007 and have a token proving this that you can sell on eBay. (Or you leave SXSW 2022 with a Wet Leg NFT, the mega-viral TikTok-famous British band.) You can also sell experiences as NFTs: Meet-and-greets and early access to new songs. You can sell exclusive ownership of art, theoretically untethered from the pressures of writing hit records because a superfan will want something more candid and weird. You can also imagine selling an NFT membership to your fan club: Every Doja Cat fan can have a token cat pic or whatever proving when they got into Doja Cat. You just scan your phone at a punk show by the merch stand.

Most interestingly, you can invest in new musicians by getting an NFT that grants future access to their future royalties. I saw Kendrick Lamar perform with Childish Gambino in 2011 during SXSW and thought they sucked. Had I been better at scouting, I could have really hit a nice chunk of change by investing.

And reportedly, the environmental impact is becoming less awful. Blockhaus’ Carolyn Rodgers said Friday that her company uses an eco-friendly type of blockchain to store NFTs called Tezos. Dai added that his company can mint NFTs and use less energy per minting than the juice it takes to fire off a tweet.

(The Daily Dot has not verified these claims, but I think the point is that the medium is going to keep making excuses for its environmental impact and, like with gaming or streaming, users will begin to stop considering how much wattage their digital pleasures cost.)

And, yes, there are places to gather and sell/play your NFT.

Forrest Browning is the chief product officer for Audius, a sort of blockchain-based SoundCloud. He says Audius boasts 6 to 7 million monthly users and has uploaded about a million pieces by musicians. And NFTs theoretically provide aid to a biz with a unique problem: Musicians have always been bowled over by record labels that take “85%” of their profits, Dai said, and pay pennies for streaming royalties on platforms like Spotify.

If you have “100 true fans” as SXSW speakers love to note this year, you can leverage them to subsidize your art and not worry about the comparative, unscalable chump change on Spotify.

The circa-2003 college dorm ethics argument used to be that pirating music was good because fans would know and love it and then buy directly, IRL, at shows. Music royalties were bad anyway! Better to be in the cultural convo than not! But, Browning says, we now live in a digital world where we’re always on our phone. The landscape is fundamentally different: CDs ain’t what they used to be.

The panelist’s argument that the digital world must evolve and that NFTs can be the medium for fans who want to interact with their faves is not b.s., no matter how repellent the jargon and facts around NFTs may be.

Invest in crypto and trade it like a pro

Cryptocurrencies are in their infancy and this is truly a once-in-a-lifetime opportunity to get involved. With Bitcoin, altcoins, and ICOs (Initial Coin Offerings), we can either invest for the future or make short-term day trades.

The Complete Cryptocurrency Investment Bundle will show you how to make your first crypto investment and take advantage of an exciting new financial opportunity. Best of all, the entire bundle is only $24! Sign up to register today.

Our team of reporters are on the ground at SXSW in Austin, TX. Here are some of the notable, interesting, and weird things they are seeing.

🎧 We usually don’t do much music at the Daily Dot (because we cover internet culture), but with this year’s very online crop of TikTok-viral artists at SXSW, we had to stick around for that second wave of the conference. In addition to more great scene reporting, every day, we’ll be updating this sweet Spotify playlist with good songs we heard IRL. Keep it locked. — Ramon Ramirez

📷 The Samsung Billboard Galaxy House was built for an Instagram feed. With mirrored obelisks and starry walls to take pictures with, it’s enticing to any influencer trying to get good content for their SXSW vlogs. — Daysia Tolentino

🎙️ At Las Perlas, I took Tiffany K’s recommendation to heart and watched Desire perform its goth synth jams during the Gorilla Vs. Bear showcase. I’ve been reading the former MP3 blog since at least 2009 and it was great to get a seminal music website back in Austin to curate a lineup like the golden days of SXSW day parties. — Ramon Ramirez

🎵 Be sure to check out Laiken Neumann’s review of a set performed by Wet Leg, an indie-rock duo that has shot straight into the stratosphere of rising indie starts bolstered by TikTok virality.

💱 Bobby Hundreds at a creator talk: “I always say, I wish I could pay my therapist in Ethereum.” — Tiffany Kelly

🍀 March 17 is historically the most bro-tastic day in America: March Madness and St. Patrick’s Day collide into a problematic spree where men leave work early and dump-off tasks on co-workers who do not care about amateur hoops. And so the Daily Dot staff gathered at an area Irish pub for the requisite pint of Harp. Ultimately, a chaotic and poor choice to meet up.  — Ramon Ramirez

💰 Just in case you missed it: Grace Stanley reviewed Diamond Hands: The Legend of WallStreetBets, a MSNBC-produced documentary about the GameStop stock craze with Reddit’s r/WallStreetBets at the center of it. Check it out here.

🥁 Over at Spin magazine’s showcase at Stubb’s, the Lemonheads performed It’s a Shame About Ray to celebrate its 30th anniversary and Bass Drum of Death blew out my hearing during “Crawling After You.” Inside, Black Star Kids fused emo and hip-hop with incredible energy and stole the night. — Ramon Ramirez

🎟️ Samsung is back to sponsoring big-ticket rap concerts at SXSW. Thursday, Young Thug and Gunna performed a tidy set that wrapped by 10:15pm CT. Thug was slated to go from 10 to 10:45 so downtown patrons were disgruntled in the immediate aftermath. Gates told this reporter that only about 1,000 of the 2,000 allotted slots for SXSW badges were filled, which would make the majority of the crowd ticket-buying fans. At least we heard “Pushin P.” — Ramon Ramirez