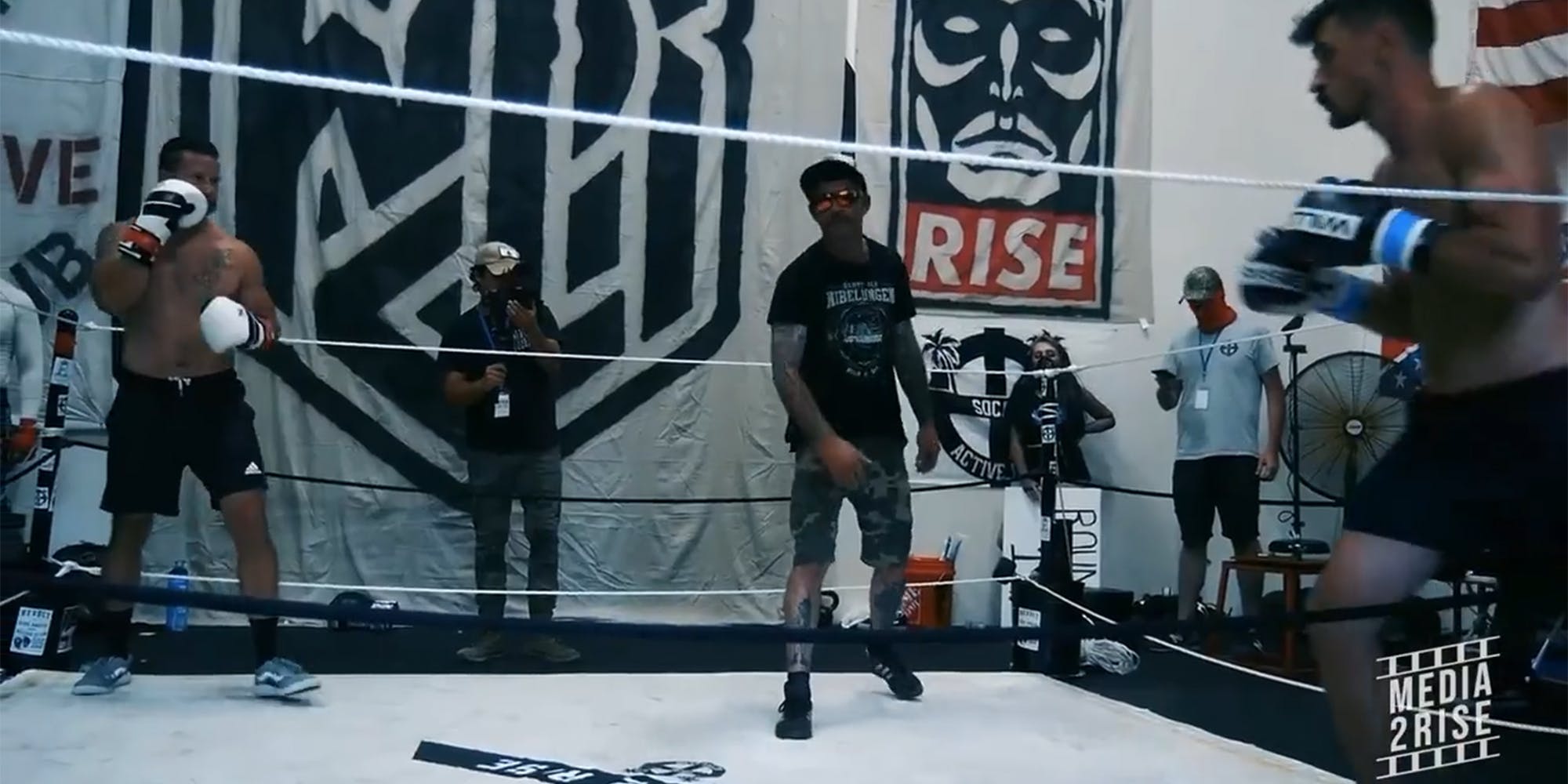 It was, in the words of an account from the blog Hyphen Report, a showcase of the strength of “the fabric of nationalism in America that will terrify Jewish power for decades to come.”

“Birth of a New Frontier,” as it was called, had attendees from across the country, as far away as Florida and Texas, Washington state and Washington, D.C.

In its report on the night, the author of the blog said that, “This event wasn’t for the public; it was for a special few who were dedicated enough to the craft of fighting and to building a nationalist internal culture that they found their way to it. Every fighter and attendee understood that they were participating in a historical first and that, like Charlottesville and the Battle of Berkeley, a man could be proud of being there for years to come.”

A post about the event on Telegram from one of the hosts declared that “Not only are we awakening the warrior spirit, but we are demonstrating that we can organize on our own, outside of the mainstream structure. We are creating a counterculture of resistance” and that “for the first time, a roster of fighters from across the spectrum stepped inside a ring to do battle for brotherhood and our shared goals.”

Those shared goals were apparent in images from the event. Photos from the event capture its racist underpinnings. Men duking it out in sports kilts and shorts, their bare chests emblazoned with overtly fascist tattoos, like the Nazi symbol known as the substitute swastika.

In one photo, a spectator delivers a Nazi salute. Medals were awarded that matched fascist symbols originally used by the Nationalist Party of Italy.

The news of the event was first reported by Left Coast Right Watch.

And there was swag. A post on an Arizona nationalist channel featured video of a record album given to him by an associate that attended the event. The album, from racist rapper No Face Nate, is titled 3.0 and features songs with titles such as “Bleed Red.” Many of the tracks include audio clips of the leaders of the two movements, Robert Rundo and Thomas Rosseau making speeches.

In the article about the event, Hyphen Report cites both RAM and Patriot Front’s dedication to training as a reason for staging the fight, noting that Patriot Front’s regime was an offshoot of RAM’s, who claim to have built a culture of Active Clubs, training organizations for white nationalist groups.

“While fitness and self-defense would have come into focus for [Patriot Front] regardless of outside influence, it is easy to see the mark of RAM on their stylized training videos and culture of camaraderie in sparring.

Leaked Patriot Front videos show their training isn’t quite the combat one might imagine, however.

But Durand, in his piece, had high praise for Patriot Front’s ability to literally be punched in the head.

“One of the hardest-fought bouts of the night was between Luke and an unnamed Patriot Front fighter. Many had come to the event more or less aware of the full-time training that Luke and some Active Clubs were conducting but few were prepared for the quantity and quality of Patriot Front fighters. Apparently, these guys do nothing but punch each other in the head all day because the [Patriot Front] men had a nearly uniform high standard of physical fitness and fighting stamina. It certainly didn’t hurt their fighters’ confidence to have several dozen of their brothers cheering them on.”

The groups being bashed in the head will soon be available for all to see. Media2Rise, RAM’s media outreach organization, dropped a trailer for an apparent upcoming show about the fight club.

Media2Rise did not immediately respond to a Daily Dot request for comment.

RAM is the nationalist organization started by fugitive Robert Rundo. RAM members have been prosecuted by the Department of Justice for their actions at Charlottesville, as well as Huntington Beach and Berkeley, California

“These defendants, motivated by hateful ideology, incited and committed acts of violence in Charlottesville, as well at other purported political rallies in California,” former U.S. Attorney Thomas Cullen said in a press release announcing RAM indictments, and they are “not interested in peaceful protest or lawful First Amendment expression; instead, they intended to provoke and engage in street battles with those that they perceived as their enemies.”

Their founder, Rundo, fled the country after being charged for assault at a rally in California in 2017 and remains at large, but was last reportedly seen in Bosnia.

When federal authorities raided his home in 2018, they found a framed portrait of Adolf Hitler.

Rundo also has a previous conviction for a gang assault in 2009 in which he stabbed a Latino man in New York. He claims that this incident is what motivated him to start his Active Club movement.

The impetus behind the event was the so-called Active Clubs movement. In a blog post from June 2020, Rundo wrote, “The nationalist movement was never built on idle talk but on those with an iron will who didn’t back down. In a time of weak men, it only takes some effort to rise above all. Combat sports is that way up.”

In a post from Media2Rise, after the event, one person highlighted the importance of Active Clubs as a reason for the event showcase.

A centuria of American nationalists from across the United States, from different organizations, Active Clubs, crews, etc were not standing in a packed venue circling a fighter’s ring just for the sole purpose of competition, but to set the template for the future,” it said. “Our 3.0 style of pushing physical fitness and lifting ourselves to higher standards and capabilities has been taken to new heights as we have reached a new milestone within our unified movement… This is White Youth in revolt- this is the birth of a new frontier!”

The White Youth in revolt aptly describes Patriot Front, a white supremacist organization fronted by Thomas Rousseau, and comprised of young men. Patriot Front recently made headlines when members of the group were arrested in Coeur d’Alene, Idaho, where they planned to disrupt a local Pride event. Police arrived after a private citizen reported seeing young men with shields and gear piling into a U-Haul in a hotel parking lot.

Patriot Front has been beset by leaks of chats from its members, including one which revealed the group toured Europe with outwardly white nationalists group.

Patriot Front was apparently still training in California in the days after the event, according to a post.

After the fight, participants were thrilled, although Hyphen Report said the fighters all competed too well to declare a true winner.

But establishing winners and losers wasn’t the goal. Uniting white nationalist groups was, according to Hyphen Report wrote.

“There really isn’t a lot that enemies of our race can do to stop this particular cultural phenomenon and the most exciting thing is that they don’t even know it yet. With a foundation of competition and brotherhood, it is just a matter of time before our brothers or our sons produce a critical mass of revolutionary spirit that will sweep the West as happened in 1776 and 1935 and when it happens, I would hate to be in the shoes of anyone who gets in our way.”