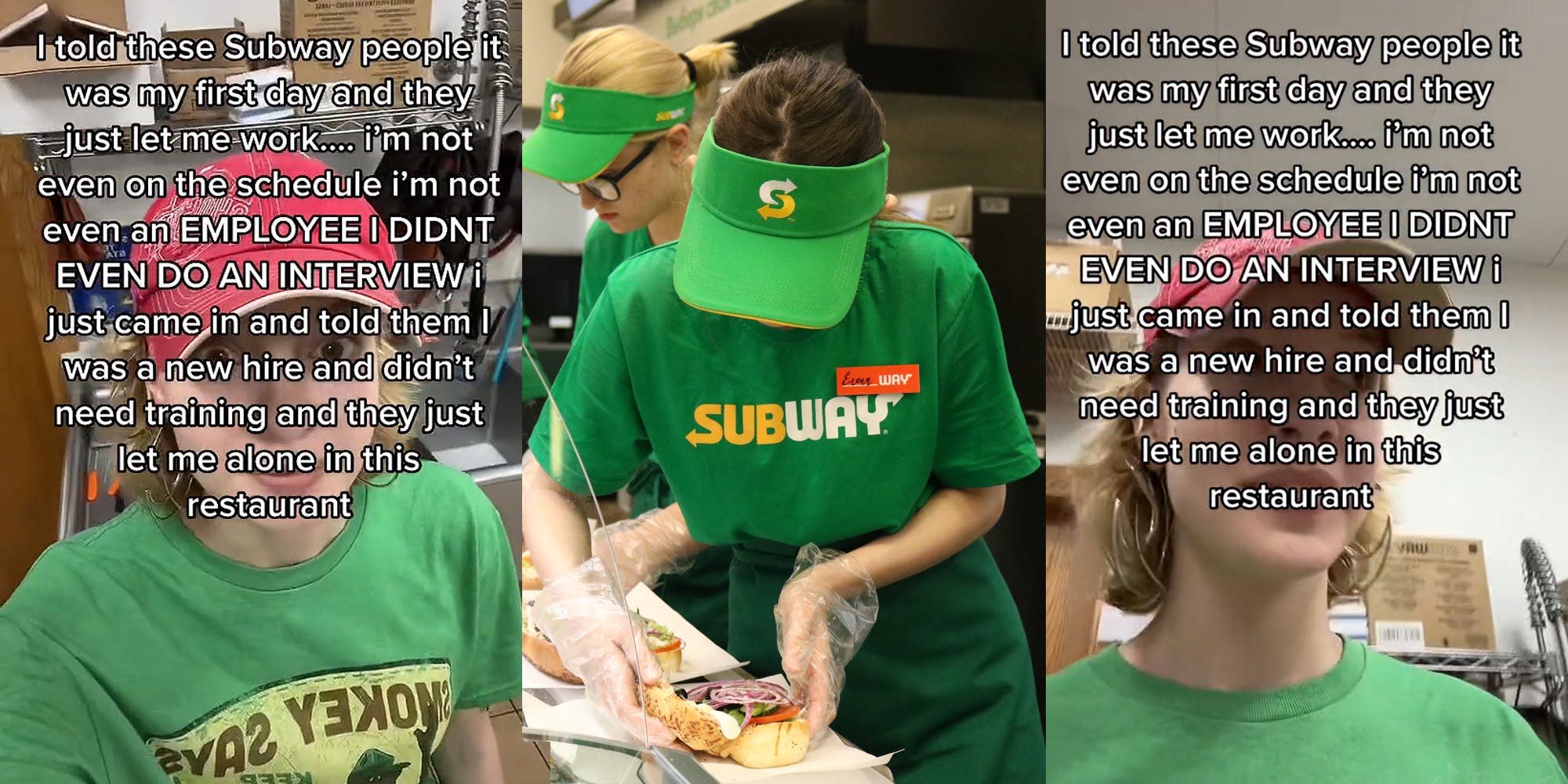 A woman went viral on TikTok after sharing how she allegedly walked into a Subway and started working with no questions asked—despite never officially being hired there.

The TikToker, Fran (@comedycupid), records herself in the back room of a Subway location, claiming that she simply walked in and claimed to be a new hire. She also added that the other workers allegedly left her alone to man the store.

The video has been viewed 6.1 million times since it was shared Wednesday. Viewers in the comments claimed this was typical Subway behavior.

“I worked at subway for a lil in 2016 and they been like that never a care,” one user wrote.

“Super normal for them tbh. Every subway I have ever worked at I started working the same day as my interview,” a second shared.

Other users claiming to be former Subway employees said they were also swiftly left alone on the job shortly after starting.

‘I applied to a subway, got an interview the next day, and started working the next. by myself. they do not care,” one viewer said.

“They just told me to look at the little pictures and steps to make the sandwich and then LEFT ME ALONE… I also got fired weeks later Bc I didn’t ring,” another added.

According to commenters, Fran isn’t the first person to do this. One user said their former partner once did the same thing at Little Caesar’s.

“My ex did this to a different little Caesar’s than the one he worked at. He started making a pizza,” they explained.

Another user said their employer similarly didn’t confirm that they were a legitimate employee before they started, though they were actually hired to work there.

“No bc for my first (actual, scheduled) training shift at Dunkin I just walked in and did the same thing they didn’t ask for id or anything…” they claimed.

However, another user said their new coworkers at Wendy’s double-checked with the manager when they clocked in for the first time.

“It was actually my first day at wendys and they didn’t tell no one i was coming but they called that manager to see if i was legit,” they added.

The TikToker shares in a follow-up video that she had gone in for an open interview, but only wrote down her information. She says she was never actually interviewed but was told to come in to work the next day. Fran then claims they didn’t have her sign any paperwork as an official employee on her first day. She also claims the manager “didn’t have clearance” to give her an employee ID.

Fran then claims there was a myriad of issues at the Subway location, including a broken AC, a broken freezer, wilting vegetables, and grime. When she asked the manager about training and cleaning, she says she was told they only wash the bread pans once a month and don’t need to regularly clean their knives. She claims the only “deep-cleaning” the store does is wiping off the counters and sweeping and mopping the floors.

“What about the retarder—which is what they put the bread in to let it rise? What about the ovens? What about literally everything else that you’re using in the store? She’s like, ‘No, we don’t clean that.'”

The TikToker then alleges that the worker training her said she didn’t think they were going to pass the next health inspection. When Fran started cleaning, she says the other Subway employees called her an “OCD clean freak.”

Fran says she contacted Subway’s human resources department and the health department about her experience in an additional follow-up video..

“So, I called the Subway HR and I’m like, ‘hello your store is a fucking mess,” the TikToker begins the video. However, she says the Subway HR representative told her to leave a review online rather than address the issues with her over the phone.

The creator then called the health department in her county.

Unfortunately, the outcome wasn’t what she expected. After her phone call was transferred to the health inspector, they didn’t answer. However, she left him a message, explaining what occurred at Subway.

“This store is disgusting, like, capital D disgusting,” she says in the message.

Fran wrapped up the video by stating she’s going to leave it up to the health inspector to solve the problem.

In a final TikTok video about the situation, Fran reveals that the health inspector called her back, claiming he’s going to look into it and speak to the Subway managers. The TikToker then explains that the reason she took matters into her own hands is to ensure the employees have a safe work environment.