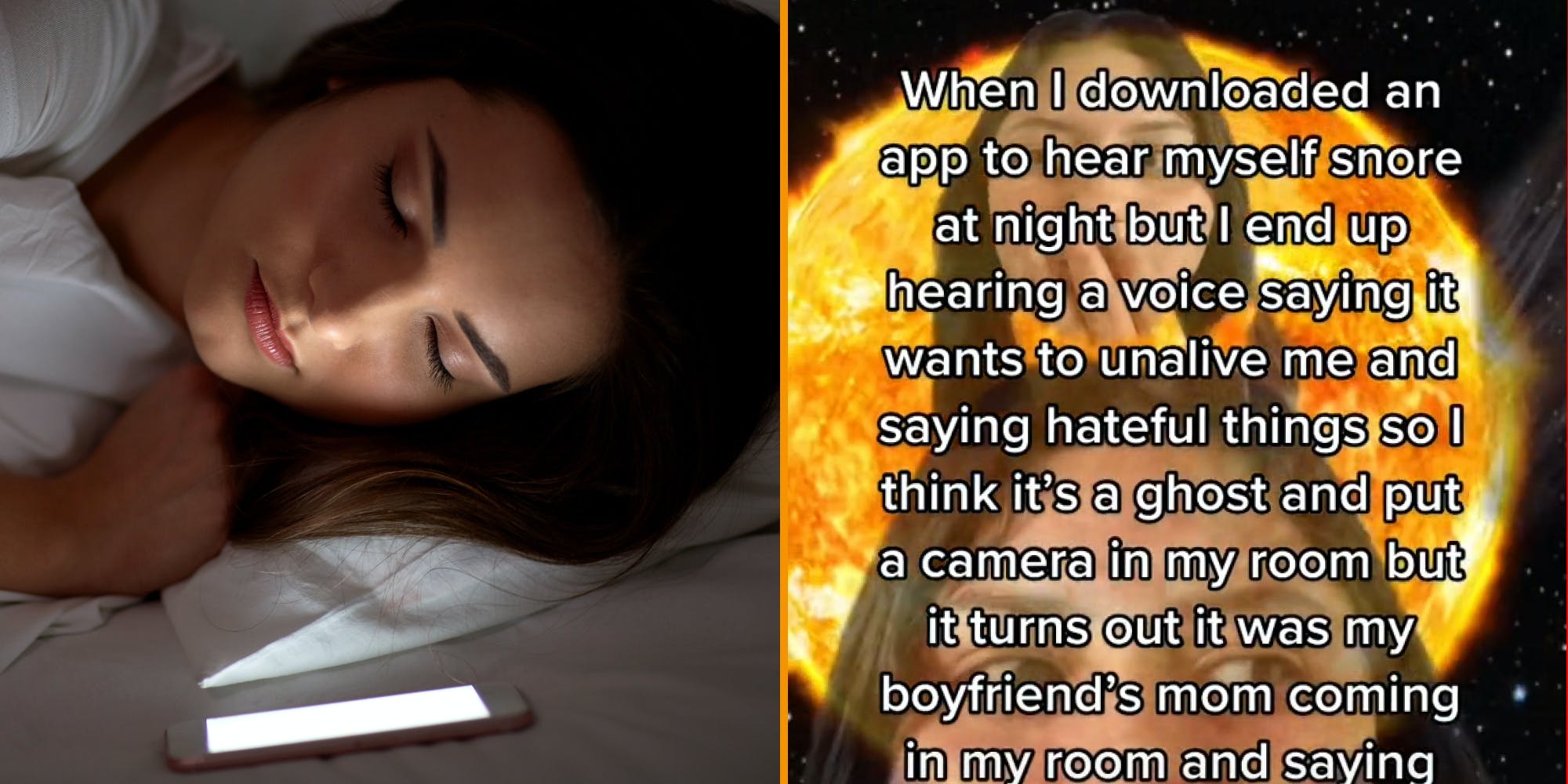 A TikToker has gone viral after claiming that an app designed for sleep tracking accidentally caught her boyfriend’s mother threatening her life.

The video, posted by user Rosa (@rosiduh), shows Rosa’s face of disbelief while the text explains the situation.

“When I downloaded an app to hear myself snore at night but I end up hearing a voice saying it wants to unalive me and saying hateful things so I think it’s a ghost and put a camera in my room but it turns out it was my boyfriend’s mom coming in my room and saying those things while I slept while hovering over me,” Rosa writes in the video.

Later, Rosa posted a still from the video she says captured her boyfriend’s mother making threats against her.

If this allegation is true, Rosa is in a terrifying situation. TikTokers were thus understandably horrified by the claim.

“I’d rather it be a ghost at that point,” wrote one user.

“This scared me on such a deep level,” added another. “I’m actually tearing rn.”

In later TikToks, Rosa elaborated on the story.

To summarize, Rosa’s mother-in-law and children are living with her because the mother-in-law just got out of prison and has no place to stay.

Rosa says that one day she got a targeted ad for a sleep recorder app. After downloading the app and hearing herself snore, she also caught odd whispers. Specifically, she heard someone saying things like, “You’re so ugly” and “I hate you.” Some of the voice’s comments also jealously referenced Rosa’s relationship with the mother-in-law’s daughter, whom Rosa helped raise when the mother-in-law was in prison.

After hearing three day’s worth of whispers, Rosa became convinced that something supernatural was happening. The mother-in-law was not an immediate suspect because, to quote Rosa, “My mother-in-law has always been so sweet to me. She still is, to this day… Why would I assume it was her?”

In response, Rosa purchased a motion-activated camera. After a few uneventful nights, she caught her mother-in-law hovering over her. Unfortunately, no audio recorded at this time—but paired with the previously recorded audio, it paints a chilling picture.

Rosa says she has told neither her boyfriend nor anyone else about what the mother-in-law said for fear that it will ruin the family dynamic. According to Rosa, it may also run the risk of sending the mother-in-law back to prison.

“I don’t think anything is going to happen to me,” Rosa adds in another video.

In comments, TikTokers claimed that if this story is true, Rosa is not taking her problem seriously enough.

“Girl, I think you should tell your boyfriend,” wrote one user. “I mean it’s about your safety at the end of the day.”

“This isn’t ok, this is a life threatening situation,” explained a commenter. “You need to report her to the police with evidence. Through your tone I feel like you don’t realize your life could seriously be in danger—maybe she’s not a bad person, but she could be, and you need to take action.”

Through all this, Rosa seems to be in unusually high spirits, even posting a comedy TikTok referencing the situation a few days later.

This only made TikTokers’ concerns grow.

“This isn’t even a joke,” said a commenter. “We’re all genuinely concerned for your safety. You’re way too relaxed about this.”

But to Rosa, making videos is simply a way of dealing with a bizarre situation.

As she wrote in one comment, “It’s how I cope.”