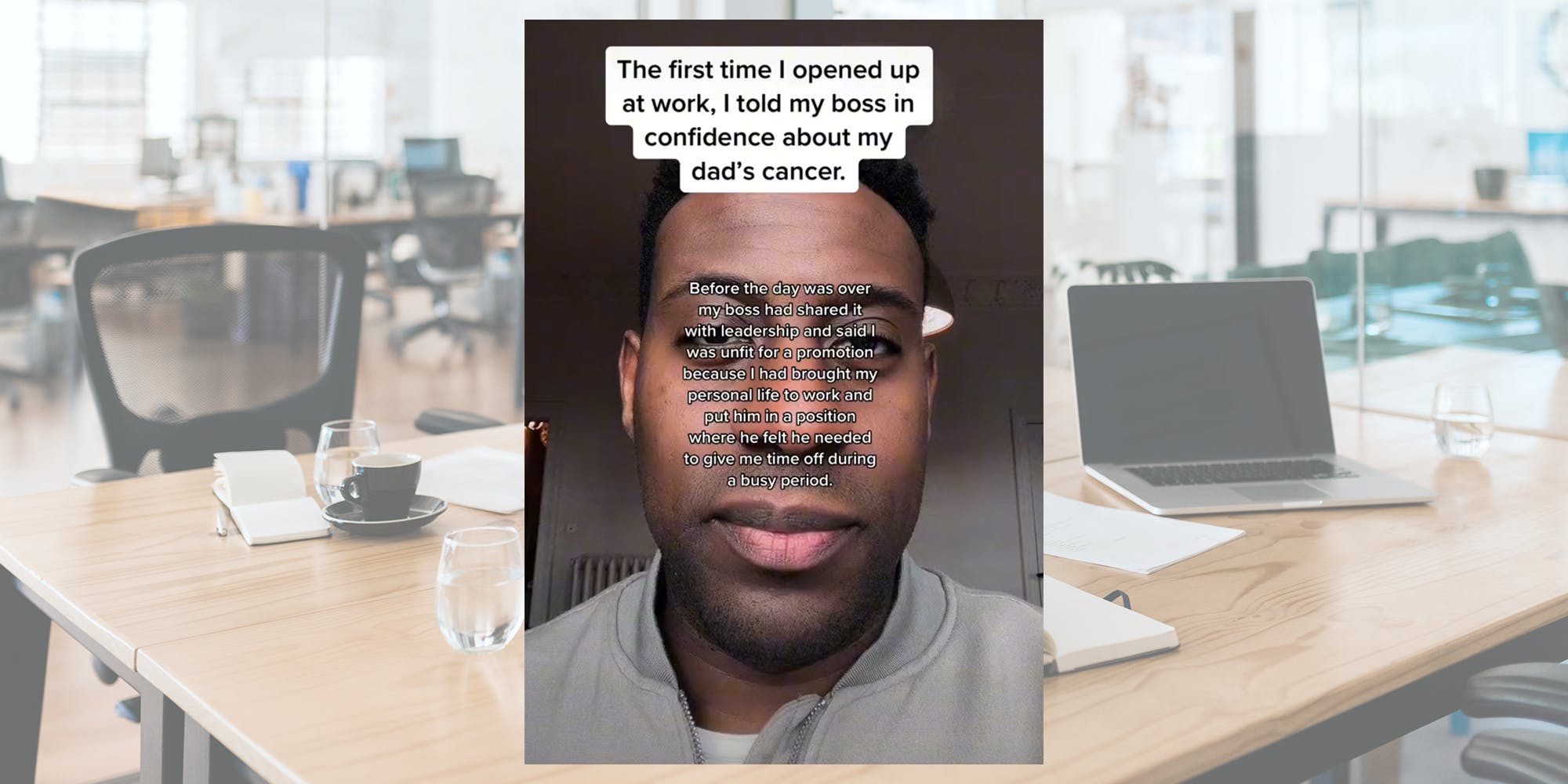 In a viral TikTok, a worker said his former boss wanted to deny him a promotion after he told the boss in confidence that his dad had cancer, sparking outrage and debate about vulnerability and trust in the workplace.

The viral video, which has over 430,000 views, was posted earlier in the week by Alex Ahom (@alexahom), a TikToker with over 21,500 followers who makes content surrounding work strategy, mentorship, and culture. The video shows the TikToker filming himself with sad music playing in the background.

“The first time I opened up at work, I told my boss in confidence about my dad’s cancer. Before the day was over my boss had shared it with leadership and said I was unfit for a promotion because I had brought my personal life to work and put him in a position where he felt he needed to give me time off during a busy period,” the TikToker wrote in text over the video.

“Truly shocked deep down to the core,” the TikToker captioned the video.

Truly shocked deep down to the core 😠

♬ the winner takes it all – november ultra

Many viewers in the comments section were shocked and angry after hearing the TikToker’s story.

“What a cruel world we live in…so sad,” another replied.

Many took shots at the manager in the story for his behavior.

“This boss is unfit to be in a leadership position,” one user criticized.

Others urged fellow workers to not trust upper management with personal information.

“Tough lesson people at work are not our friends. Many managers are threatened by the staff below them,” one user argued.

“NEVER tell your job your personal business. No new car, no new house, no deaths, births, etc. All those things give them leverage over you,” another warned.

Another user asked the TikToker to share where the incident took place, commenting: “tell us the place.” In a video response to the comment, the TikToker implied he did not wish to dwell on the past.

“Part of the reason why it was so hard was I didn’t expect it. It was heavy and I had to learn to deal with that weight. They are behind me now, off my back and out of my thoughts,” the TikToker says in the video response.

In a second and third follow-up, the TikToker responded to those questioning his openness in the workplace, saying he now works to help business leaders improve workspaces with “empathy” and “inclusion” so that others can respond in a more positive way to workers opening up about personal problems.

“This is the huge [realization] I had about vulnerability…I was vulnerable at work and it was used against me. I was vulnerable online and thousands of people were supportive…I’ve learnt from stuff like this. Now I help others grow through being a better leader than my ex boss. Do I get what you’re saying? Yeah. Did I open up to others after this? Yeah,” the TikToker says in the videos.

The Daily Dot reached out to TikToker Alex for comment via email.