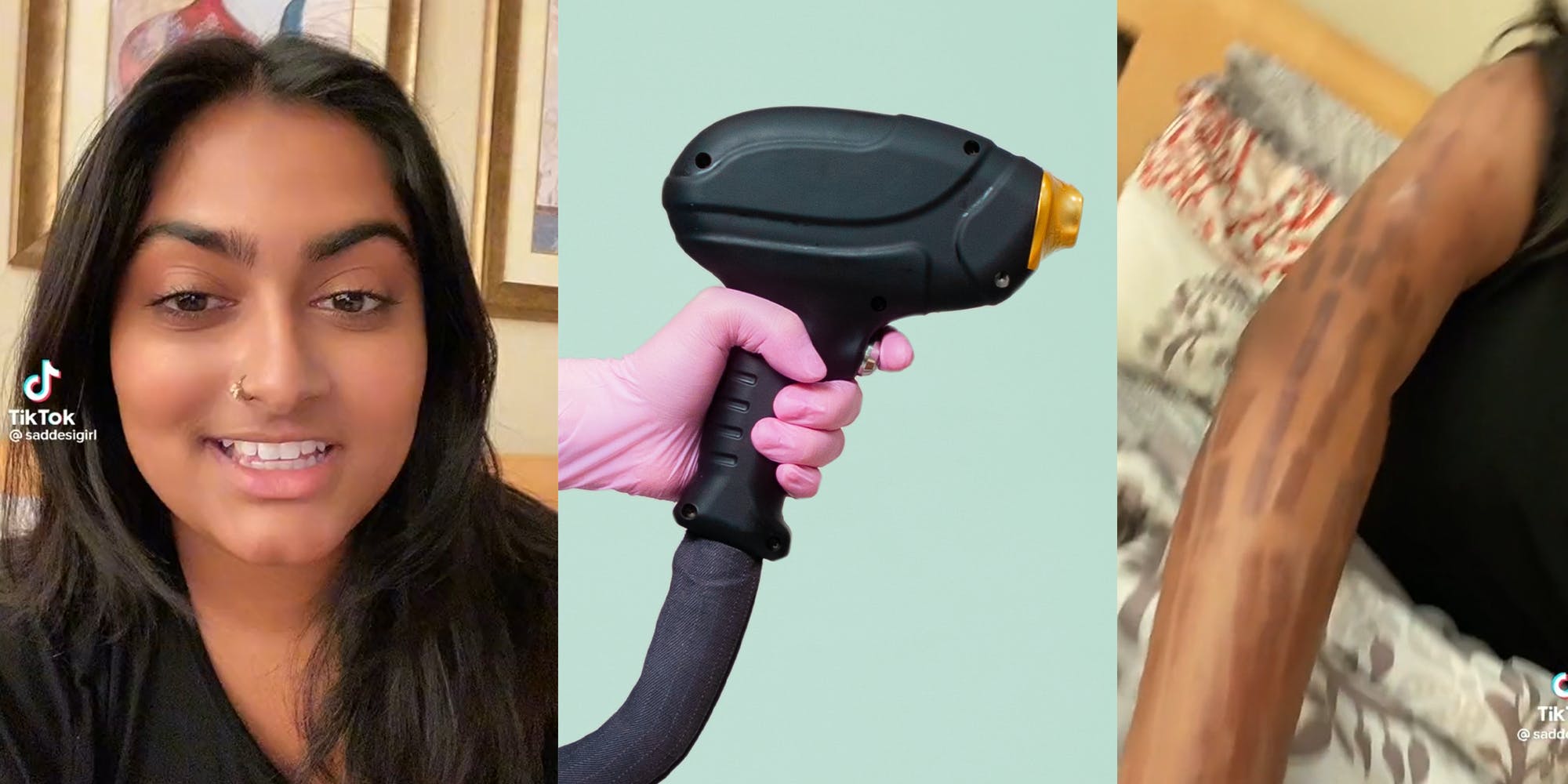 A TikToker’s video about her laser hair removal experience went viral after she said she was left with first-degree burns on her arms because she has “non-white skin.”

In a video posted Saturday, Lekha (@saddesigirl), who is Indian, said she received laser hair treatment to remove her arm hair but was left with stripe-like burns on both of her arms.

“Apparently the place that I went to does not know how to do non-white skin properly,” Lekha said.

In the video, which received 3.8 million views by Monday, Lekha said following the treatment, she went to the emergency room and was told the burns would likely scar.

According to the Mayo Clinic, laser hair removal is a procedure that uses a laser to emit heat onto hair follicles to delay hair growth. The Mayo Clinic states that the procedure can be “successfully used on all skin types,” though is most effective on people with light skin and dark hair.

“My birthday is in two weeks and I won’t be able to wear short sleeves, so that’s great,” Lekha said.

The American Academy of Dermatology Association lists scarring as a rare but possible side effect of laser hair removal.

In a subsequent video, Lekha said she tried treating her arms using vitamin E oils and Neosporin, as well as taking the medication she was prescribed at the ER.

“The stinging has gone down a lot,” Lekha said in a video posted on Sunday.

In response to one commenter who said she “seemed so calm,” Lekha said she was on painkillers at the time she filmed the initial video.

“I was a lot madder than that but I just kind of calmed down because I can’t do anything about it except try and treat it I guess,” Lekha said.

After many commenters encouraged Lekha to sue the spa where she was burned, she said in a comment that her parents are “fuming.”

“They are considering suing or at least demanding compensation from the medical spa,” Lekha wrote in the comment.

According to a 2013 study from Jama Dermatology, there were 174 personal injury lawsuits related to laser surgery injuries between 1985 and 2012. Of the 120 of these cases with public decisions, 50.8% of plaintiffs reportedly won against laser practitioners.

However, Lekha said she is unsure if she can take legal action because she consented to the treatment.

“I don’t know if I’m able to sue bc I signed a waiver before the treatment,” ” Lekha wrote in a comment. “But I never knew skin color affected the laser.”

“As an attorney, I can tell you that those waivers can have language that won’t hold up in court,” one commenter wrote. “Reach out to an attorney near you to discuss options.”

Another commenter shared their experience with laser hair removal.

“I’ve gotten laser so many times as a brown skinned girl and this should not happen,” a user wrote.