On March 3rd, 2021, Facebook user Ali Akbar, who claimed to be Dewa_Kipas’s son (known as Dadang Subur), uploaded a post the match. After his dad won the match, he claimed GothamChess reported him, then Chess.com banned Dewa_Kipas’ account. The post is no longer available.

That day, Twitter user @jarvisbudana uploaded Ali Akbar’s screenshots. The tweet received more than 4,400 likes and 1,200 retweets in less than 24 hours (shown below, left). Similarly, Reddit user TheHoodieGuy02 uploaded the image to /r/chess, the post received more than 4,100 upvotes (77% upvoted) and 160 comments in less than 24 hours (shown below, right). 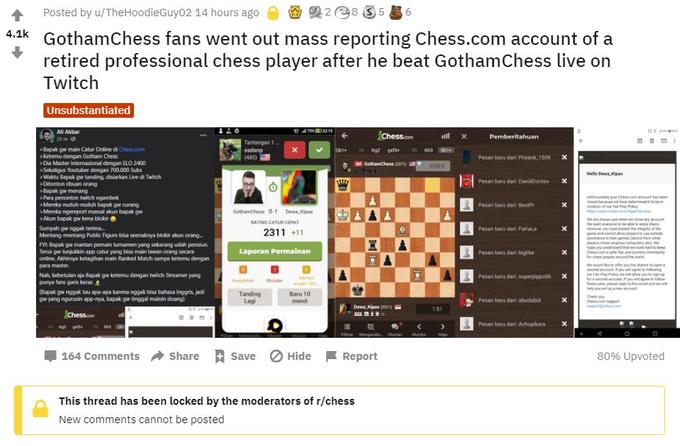 Before Ali Akbar removed or privatized his posts, media outlet Wowkia published an article about the dispute, concluding that the player Dewa_Kipas was indeed a world-class chess player. In the article, the site included a photo of Dadang Subur’s chess certificate from PERCASI, which stands for (Persatuan Catur Seluruh Indonesia) and a photo of Dadang Subur with another participate at 18th pre-PON (Pekan Olahraga Nasional) at Pontianak, Indonesia (shown below, left and right, respectively). 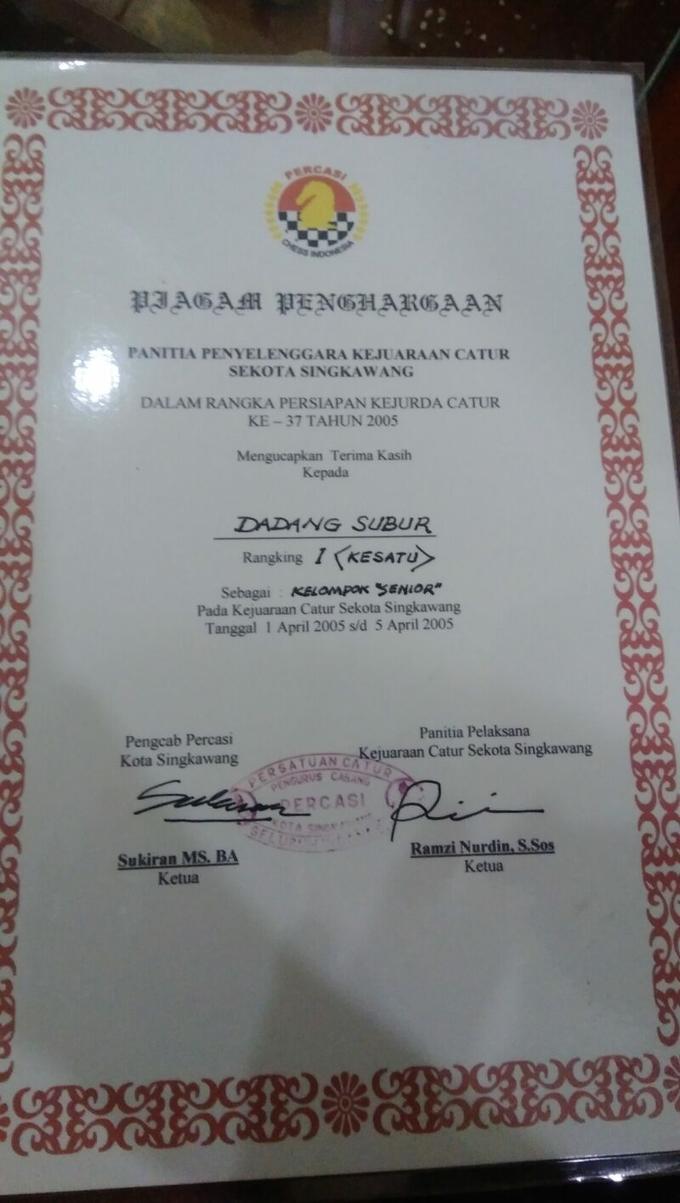 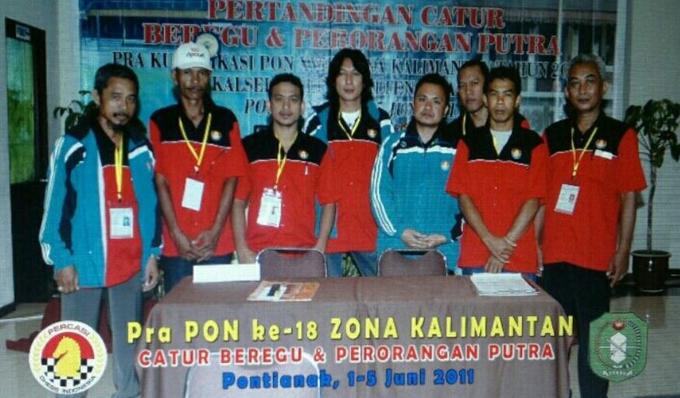 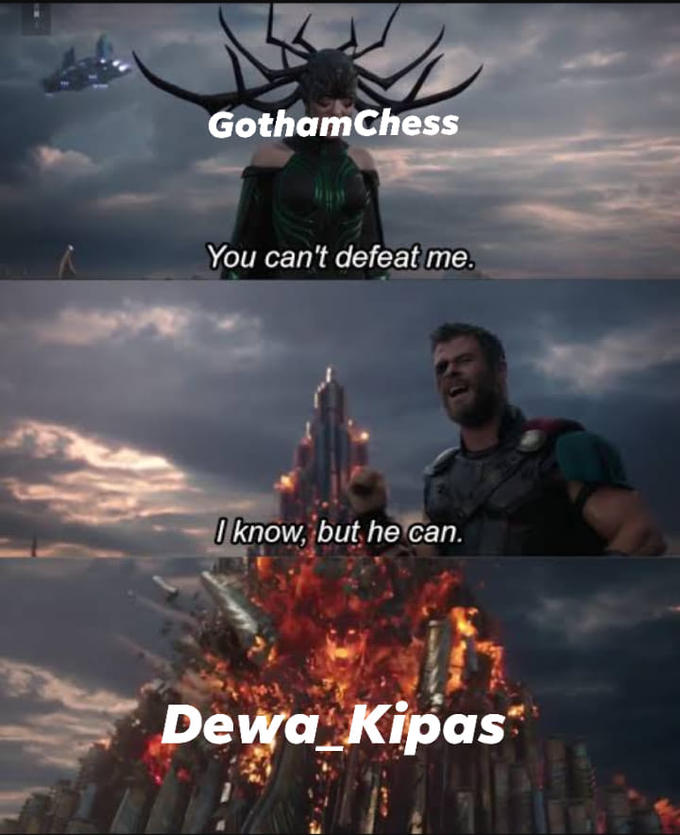 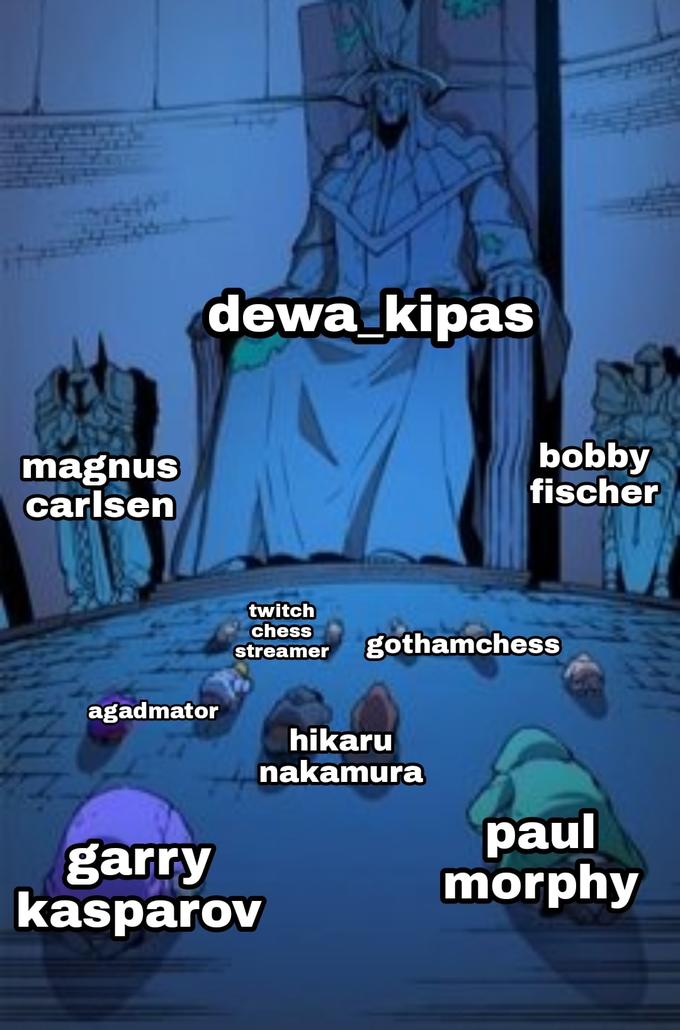 On March 3rd, 2021, GothamChess tweeted explanations for Ali Akbar’s accusation and claimed that “cheat detection isn’t mob influenced, but use data.” The tweet received more than 750 likes before deletion. That day, Facebook user Giovanni Yano uploaded GothamChess’s tweets screenshot (shown below, left). The following day, GothamChess tweeted a screenshot of his conversation with Ali Akbar. The tweet received 1,500 likes and 160 retweets in less than 24 hours (shown below, right). 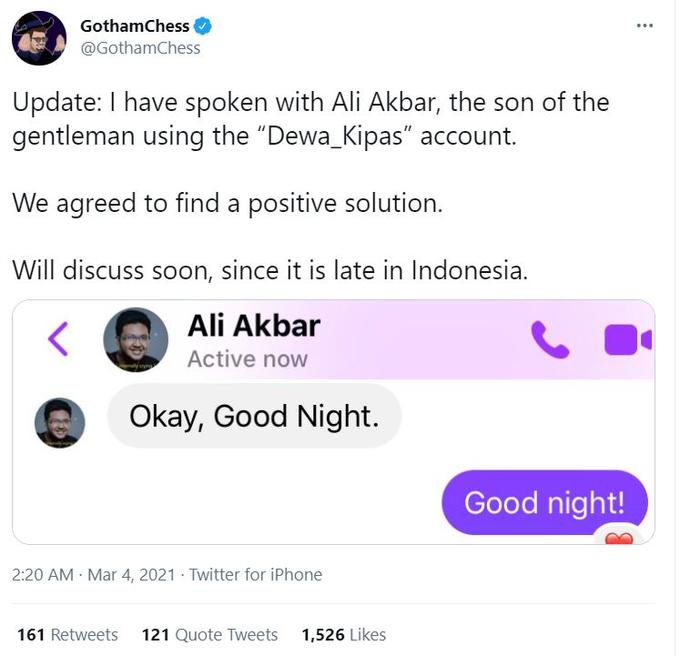 On March 4th, the Chess.com official Twitter tweeted an explanation for the controversy, which stated that users cannot mass report some accounts and claimed that the situation is under review. The tweet received more than 1,100 likes and 120 retweets in less than 24 hours (shown below). 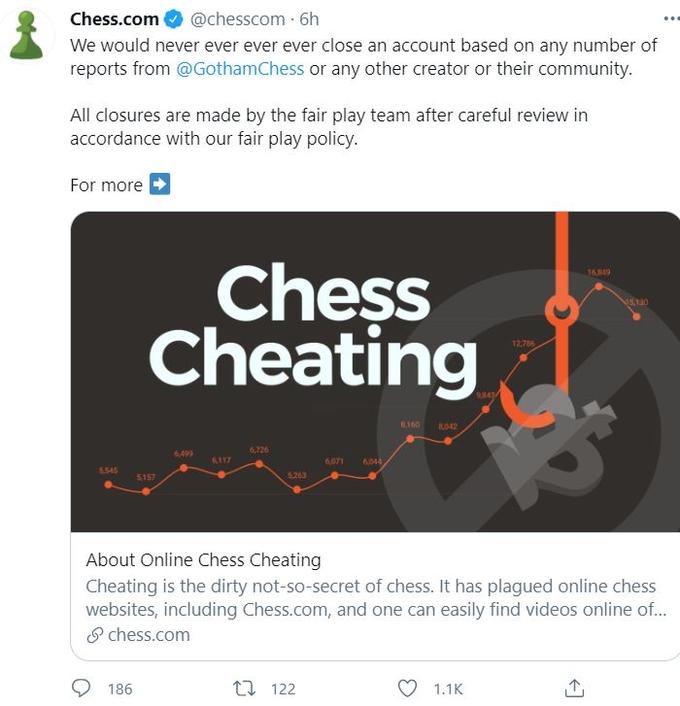 On March 4th, 2021, Ali Akbar uploaded post stating GothamChess contacted him. In the end, he claims that it was a misunderstanding and is willing upload the video about clarification and chronology (conversation below).

So I was Contacted By Mr. Levy (GothamChess) and explained all the problems Peacefully. Finally we have a deal that both of our post on each platform will be removed.
I will also make a Clarification Video along with The Chronology about this incident…
It’s all just misunderstanding.
—————————
Ini Pesan yang gw kirim ke Mr. Levy,
Semoga masalahnya bisa mencapai titik terang.
↓↓↓↓↓↓↓↓↓↓↓
Mr. Levy, it’s an honor to speak to you.
First, My deepest apologies about bunch of Indonesian People start to bullying you mindlessly because of my Post.
Second, About your match againts My Father yesterday. Yes, It’s not cheating, I can guarantee. I can explain everything about my father’s abnormalities about his stats at chess-com.
Third, If you want to talk with My Father face to face, I could set up a Video Chat if you don’t mind. But My Father can’t speak English so I will also show up as his interpreter.

So, Let me Explain.
My Father was a Retired Tournament Player since decades ago. He attended so many local chess tournament as a Club Player. If you know about PERCASI (Biggest Chess Organization in Indonesia), My father was a Part of it (A Former Treasurer).
And you might see his note full of his Match History againts Bot called “Shredder Chess”. Yes, he wrote that after each match, and keep increasing the difficulty and wrote the PGN again until the book is full of his handwriting.
BTW that was written couple years ago, and I looked for it as an evidence to convinced people that My Father wasn’t cheating.

And Just you know that, No Matter how good you are on an online game, you need to start from Level 1. Same as Chess-com when My Father forced to Play since ELO 800 when his actual ELO in his last tournament is much higher than that (Sorry, I can’t find the setup to set High ELO on the first game).
Now, the abnormalities:

1. Why He only Play Rapid?
My Father doesn’t really understand Technology, I was the one who helped him created his account, set his profile picture, set a match, set a timer, etc.
Meanwhile, Rapid (10 minutes) is the only game mode that you can access from the main menu with a single click. (He even needs my help to set the timer to 15 or 20 minutes, but stay at 10 minutes because that’s the only mode he could access from the main menu without changing the settings).
Yeah I know, what a ridiculous reason…

2. Why He Played Blitz only for Couple times?
He can’t really keep up with 5 minutes play. He can’t move that fast, especially with an old andorid phone, and he’s too old to think that intensely (But he said that he still can do it with Physical Chess).
So he only played Blitz like 12 times if I recall, and back to rapid. Because 10 minutes is still possible for him.

3. Why his Puzzle Rank is so Bad?
I WAS THE ONE WHO PLAYED IT, OKAY 😳
My father only cared about ranked match and doesn’t really cared about puzzle, Chess960, or anything.
So I helped him set-up his account, set the theme, set the match, set the timer, sending friend request, etc.
While he only play the one that instantly accessible from main menu, which is Rapid (10 Minutes).
(I played the Puzzle on a whim, duh)

4. Why his moves is so similar to Bot?
(With 90%++ Accuracy)
Because he trained using Bot all the time, as I told you before, he trained with Shredder Chess (2600 ELO) and Wrote the PGN manually on paper, and memorized it for later play.

5. Why he often loses at 1400 ELO, and keep winning later on?
This was just a speculation, but my father said he could also recognize wether his opponents are cheating or not. Because My Father said that peoples on 1400 are harder than Shredder-2600 ELO that he usually used for training. So he often loses on that rank.

6. Why he escalated to 2300 ELO in just 3 weeks?
He played it non-stop. Yes, he’s totally addicted. He was playing with Bots all the times, and when I introduced Chess-com to him and said that he can play with other players, he was really happy.

First Reason.
He played non-stop to synchronize his ELO with his real skill based on his last tournament. Well you know, because he forced to start from 800, so there’s no helping it. He wants to achieve 2400++
Second Reason.
He really wants to meet Indonesian Famous Player on ranked match, such as Susanto Megaranto. So he pushed his ELO until someday he meets his idol.
(Well, he met with you tho’)
Feel free to ask another question.
Thanks a Lot.
My Father really respects You.