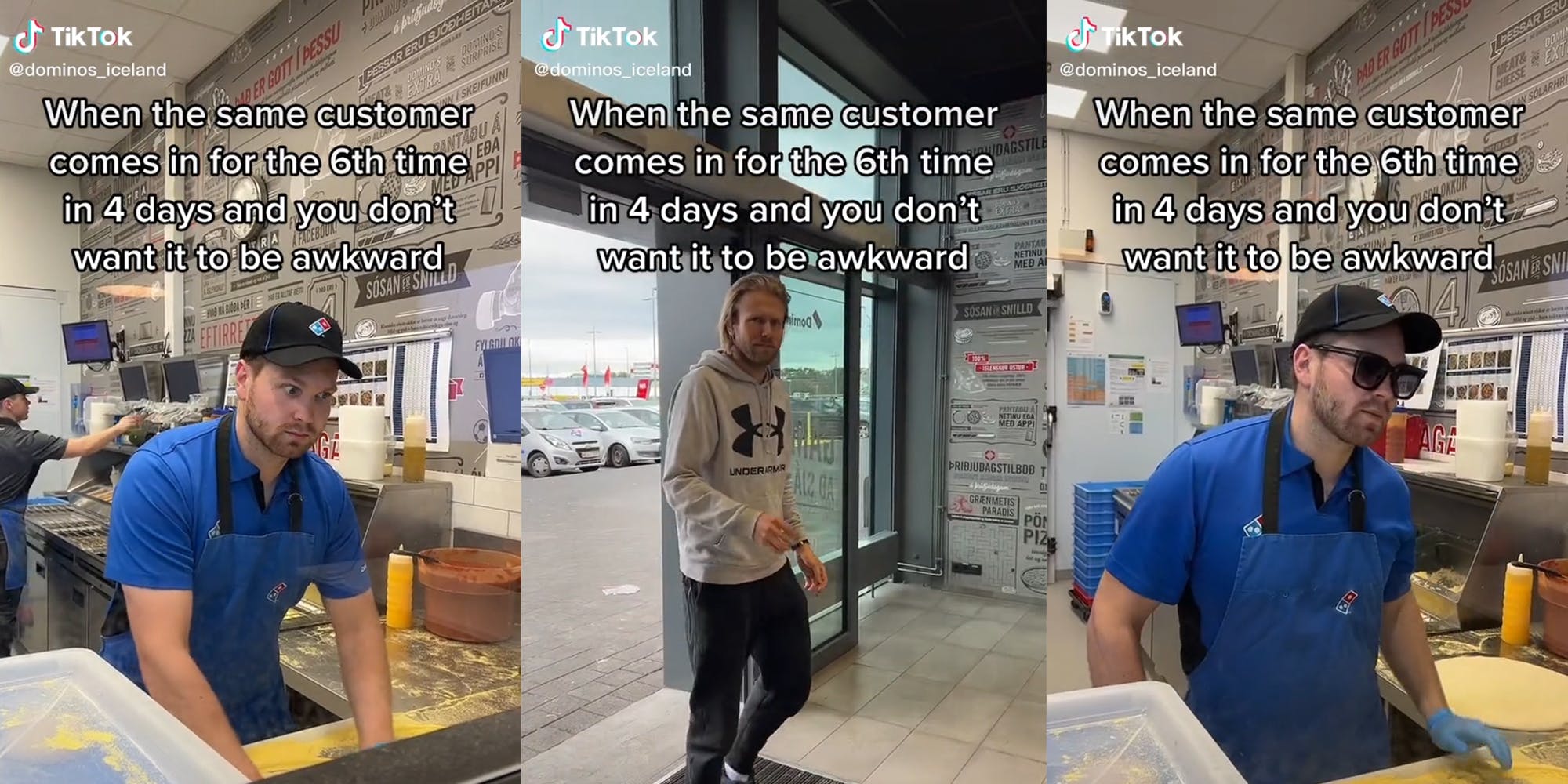 While fast-food restaurants will likely serve a customer as much grub as they want, whenever they want, as long as they’ve got the money for it, going into the same establishment several times in one week can be an awkward experience.

And that experience is not just awkward for the customers, according to a TikTok that pokes fun at this exact scenario and was viewed 440,000 times.

The video was posted by the @dominos_iceland TikTok account, a brand account that’s managed to amass over 160,000 followers.

In the video, a Domino’s employee makes pizzas behind a counter with a text overlay that reads: “When the same customer comes in for the 6th time in 4 days and you don’t want it to be awkward.”

In the clip, the customer and employee attempt to avoid eye contact with one another, until the Domino’s worker finally puts on a pair of glasses while Jason Derulo’s “Ridin Solo” plays over the clip.

There are some fast-food brands that managed to instill a sense of loyalty with its customer base that keeps them coming back for more, Domino’s included. According to the Takeout, the pizza chain ranks seventh on its list of most loyal returning customers, no small feat considering the vast amount of fast-food businesses in the United States. The red, white, and blue brand managed to beat out other sprawling Pizza chains Papa John’s and Pizza Hut, which respectively ranked tenth and ninth on the list.

Viewers remarked they are guilty of ordering food from the same Domino’s location twice in the same day. Others shared stories of how they became overly familiar with delivery drivers.

“It’s a sigh of relief when u got to a place multiple times in short order and it’s different people on shift lmao,” one said.

“Bless the dominos driver who said nothing when I ordered delivery twice in one day,” another wrote.

“I had the same delivery driver three times in a week that he literally was calling me by my name and asking me about rent prices,” a third shared.

Other TikTokers mentioned that they weren’t exactly thrilled at the prospect of getting to know the employees of a place that they visit a lot.

“Sir, thank you. This is what we all want from our regular takeout places,” one shared.

“I have to switch with pizza hut sometimes so i don’t get judge,” another said.

“I remember a fast food worker making a comment about how much she saw me there. I was so embarrassed I literally never went back,” a third claimed.

A lot of the comments seem to touch on a very real psychological phenomenon many people experience when they order/eat fast food, and that’s guilt. Seafood company Sealord conducted a survey on folks and the feelings of shame they experience when “over-indulging” on fast food. However, there are plenty of health and fitness outlets that urge folks to “stop beating yourself up about what you eat.” Health notes: “Letting go of food guilt and eating what you want is the healthiest food move you can make,” adding that the best way to re-train eating habits is to consciously monologue to ourselves how we feel following eating a particular thing and then make/stick to incremental adjustments to attaining that better feeling, not the initial rush of dopamine one gets from indulging that “guilty pleasure.”

The Daily Dot has reached out to @dominos_iceland for further comment.