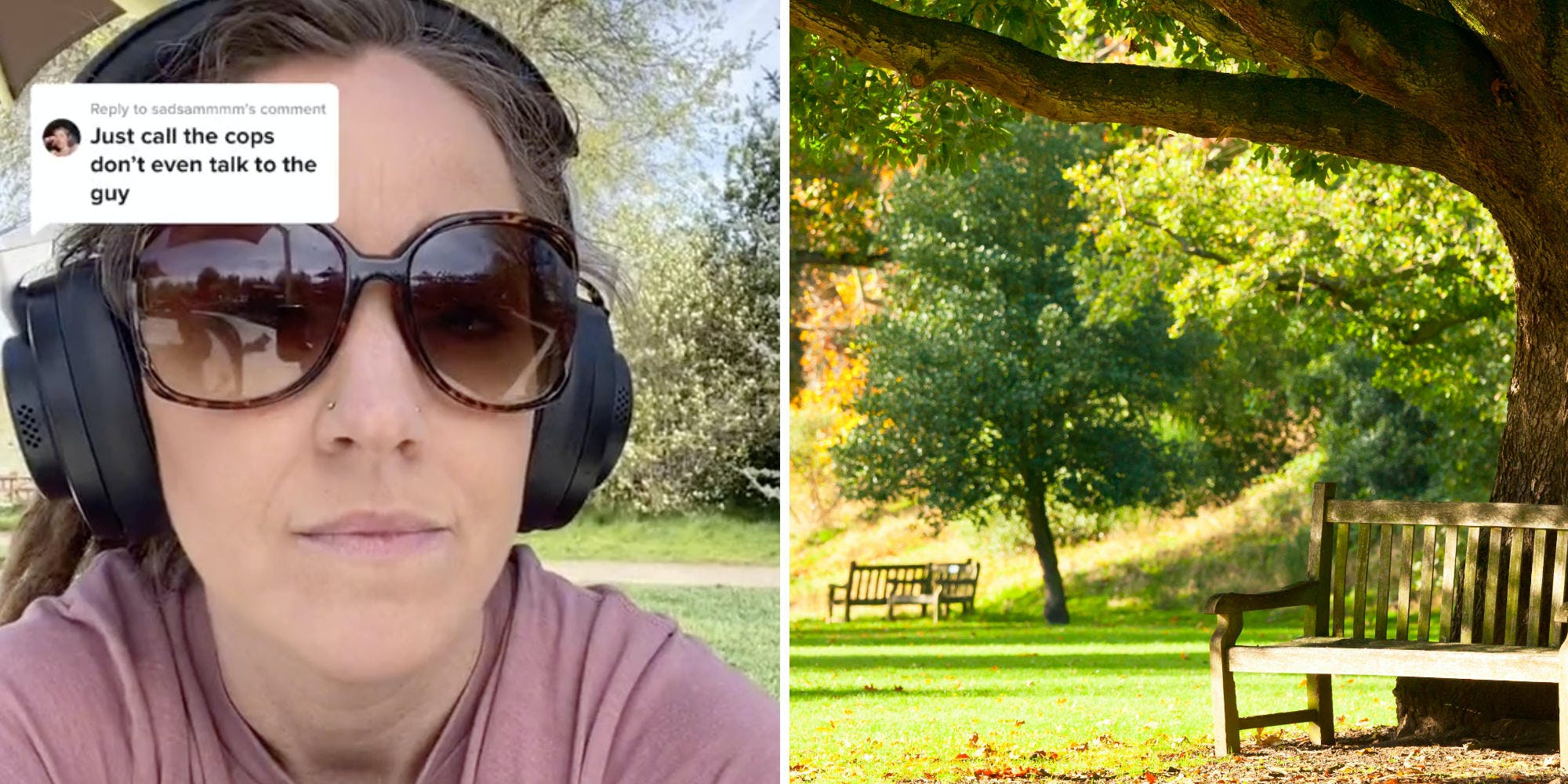 In a viral TikTok video, a woman confronts a man who she says approached her teenage daughter at a park and tried to push her on a swing.

The TikToker (@nothazel.3) shared multiple recordings of the incident, which only showed her jacket while she called the man out. The first video was removed by TikTok for “minor safety,” according to a comment the TikToker left on one of her later videos.

The second recording began mid-conversation between the mother and the man she claims approached her daughter. The video contained a red sticker saying “not all men but too many.”

“If I ever see you here again, we’re going to have an issue,” the woman says in the video. “That is a perverted thing to do.” The TikToker tells the man he made a teenage girl feel “uncomfortable” and that she didn’t need his help pushing her on the swing.

“Men shouldn’t have to feel like predators,” the man responds. Part of his response is muffled, but it sounds like he tells the mother to “get out of here.”

The man continues talking, but the mother talks over him, saying, “You do not have any reason to approach teenage girls at a park. You approached a teenage girl on a swing. You don’t think that’s predatory?”

“No,” the man answers. Then he adds that he goes to parks “all over town” and talks to men and women alike.

Raising her voice, the woman asks, “So you feel comfortable approaching a teenage girl on a swing?”

The man stutters a bit before saying he didn’t approach the girl in a “romantic way.” The woman shouts back that that factor doesn’t matter, asking him again why he approached a teenage girl at a park. He tells her “it doesn’t matter,” and the mother snaps back that it does.

“I am not a predator,” the man urges.

Many TikTok viewers didn’t agree with the man’s claim, and some said his responses to the woman spoke volumes.

“The way he responded to you tells us everything we need to know about him,” one viewer commented on the video.

Another viewer wrote, “His first reaction is all you need to know. His first response is to discount/gaslight her. Bet he does this to his wife CONSTANTLY.”

“‘All over town,'” one viewer commented with multiple red flag emojis.

The TikToker shared another recording of the incident, showing herself continuing to tell the man off. After the man declares that he’s not a predator, the woman asks him again why he approached a teenage girl.

“Because I talk to everyone of all ages,” the man responds.

“Did you approach every other woman in this park to talk to them, or just a teenage girl?” the mother asks loudly.

The TikToker tells the man he hasn’t seen anything yet and shouts at him to not approach teenage girls at parks.

“You don’t scare me,” the man says. “I didn’t do anything wrong. I talk to anyone of all ages.”

At that point, the woman appears to turn to address another woman at the park and ask if the man had approached her offering to swing her. Turning back to the man, she asks if he offered to swing them, or if he only approached the teenager. The man seems to be walking away as his voice drifts further away, and his response isn’t audible.

“Do not ever approach teenage girls, period. Period,” the woman warns. “It is inappropriate.”

The man replies that he works with teenage girls, as if to imply that that justifies his actions.

“Then you should know you do not just approach teenage girls at a park,” the woman says. “You and your fucking audacity.”

Again, viewers sided with the mother, saying the man had no reason to approach children.

“No grown man should be approaching any child of any age especially as a stranger, to offer to engage in play,” one viewer wrote.

“‘I talk to everyone of all ages’ Dear adults, you shouldn’t want to make friends with children,” another viewer said.

In reply to the comment, the TikTok creator wrote, “I suspect he was throwing that out blindly to give himself credibility. But I agree it’s major (red flag) that he might.”

The Daily Dot reached out to user @nothazel.3 via TikTok comment.