Skip to content
Oftentimes, the journey to our true calling is winding and unexpected. Take Lainey Morse, who went from office manager to creator of the viral trend, Goat Yoga, thanks to her natural affinity for goats and throwing parties.

Back in 2015, Lainey bought a farm in Oregon and got her first goats who she named Ansel and Adams. “Once I got them, I was obsessed,” says Lainey. “It was hard to get me off the farm to go do anything else.”

Right away, she noticed what a calming presence they had. “Even the way they chew their cud is relaxing to be around because it’s very methodical,” she says. Lainey was going through a divorce and dealing with a rheumatoid arthritis diagnosis at the time, but even when things got particularly hard, the goats provided relief.

“I found it impossible to be stressed or depressed when I was with them.”

She started inviting friends up to the farm for what she called “Goat Happy Hour.” Soon, the word spread about Lainey’s delightful, stress-relieving furry friends. At one point, she auctioned off a child’s birthday party at her farm, and the mom asked if they could do yoga with the goats. And lo, the idea for goat yoga was born. 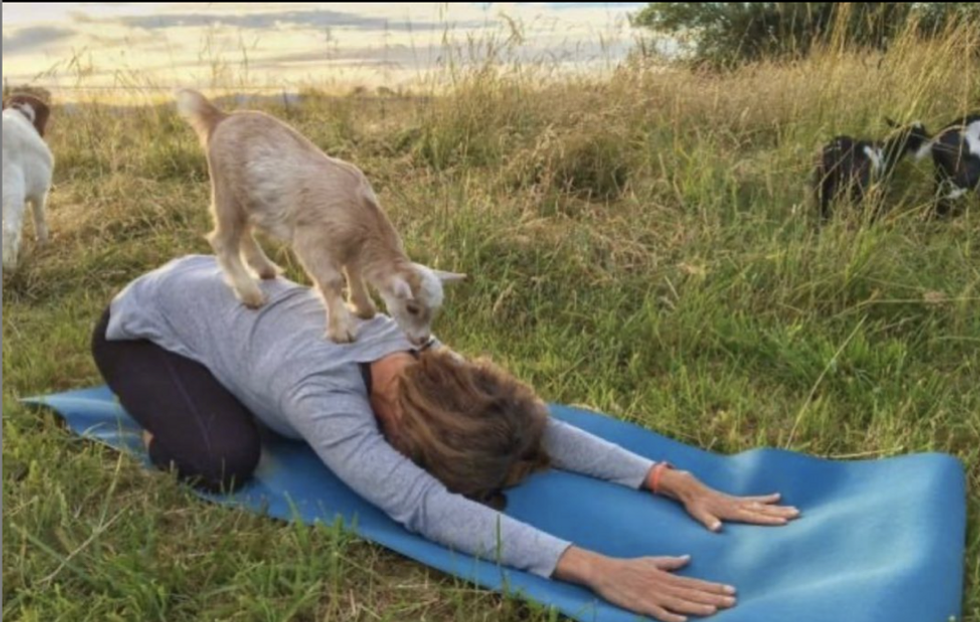 A baby goat on a yoga student. Photo courtesy of Lainey Morse

Goat yoga went viral so much so that by fall of 2016, Lainey was able to quit her office manager job at a remodeling company to manage her burgeoning goat yoga business full-time. Now she has 10 locations nationwide.

Lainey handles the backend management for all of her locations, and loves that side of the business too, even though it’s less goat-related. “I still have my own personal Goat Happy Hour every single day so I still get to spend a lot of time with my goats,” says Lainey. “I get the best of both worlds.” 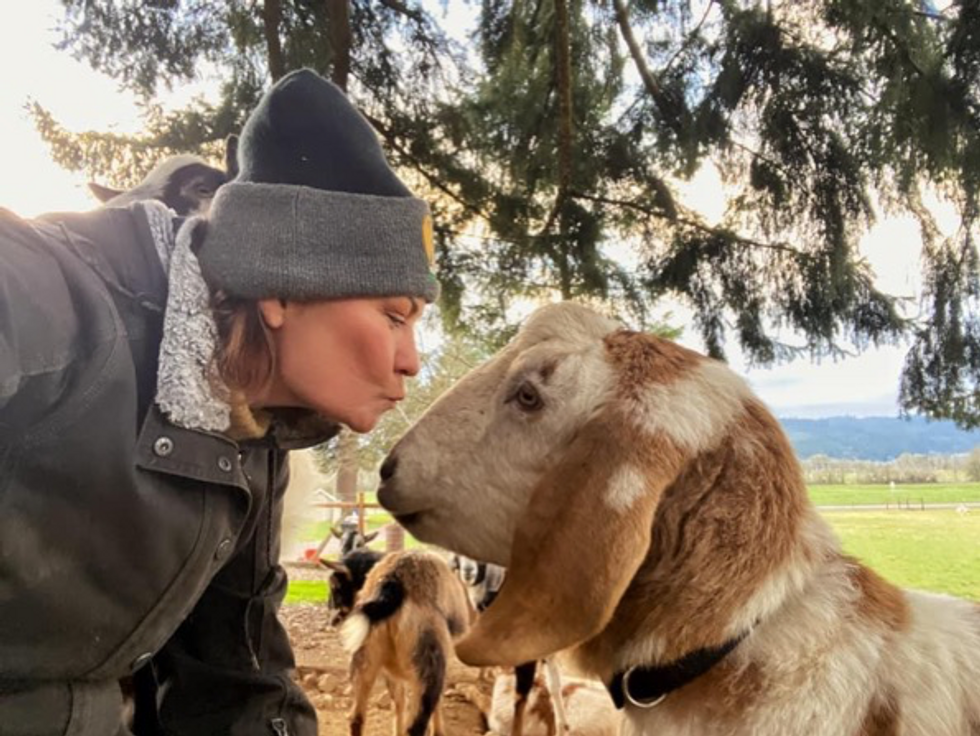 Lainey with her goat Fabio. Photo courtesy of Lainey Morse

Since COVID-19 hit, her locations have had to close temporarily. She hopes her yoga locations will be able to resume classes in the spring when the vaccine is more widely available. “I think people will need goat yoga more than ever before, because everyone has been through so much stress in 2020,” says Lainey.

Major life changes like Lainey’s can come around for any number of reasons. Even if they seem out of left field to some, it doesn’t mean they’re not the right moves for you. The new FOX series “Call Me Kat”, which premieres Sunday, January 3rd after NFL and will continue on Thursday nights beginning January 7th, exemplifies that. The show is centered around Kat, a 39-year old single woman played by Mayim Bialik, who quit her math professor job and spent her life’s savings to pursue her dreams to open a Cat Café in Louisville, Kentucky.

Jeff Harry started making similar moves when he was just 10-years-old, and kept making them throughout his life. After seeing the movie “Big,”Jeff knew he wanted to play with toys for a living, so he started writing toy companies asking for next steps. He finally got a response when he was a sophomore in high school — the company told him he needed to become a mechanical engineer first.

<small class=”image-media media-photo-credit” placeholder=”Add Photo Credit…”>Courtesy of Jeff Harry</small></p><p>Over the next 16 years, Jeff helped grow the company to over 400 employees. By “embracing a play-oriented mindset, we said yes to everything even if we didn’t know if we would be able to figure it out,” says Jeff. “We were constantly doing experiments, open to failure, not fixated on certain results.” Through this method, they became the largest LEGO-inspired STEM organization in the United States.<br></p><p>Since they were teaching lots of kids whose parents worked in Silicon Valley, they were eventually asked to run team-building workshops with some of the top tech companies in the business. They did this for nine years and excelled at it, but eventually, Jeff began to feel like the importance of play was getting lost. In response, he created a consulting business called <u><a href=”https://www.rediscoveryourplay.com/” target=”_blank”>Rediscover Your Play,</a></u> which uses positive psychology and play to help reinvigorate employees and help companies tackle workplaces challenges.</p><p>Now, he finally feels like he’s found his purpose because he’s living, and sharing, his passion for play every day.</p><p>Your life and career path don’t have to look like anyone else’s, in fact, it’s usually better when they don’t. If you follow your gut and buy some goats or apply to an unorthodox job posting on Craigslist, you might just open a door to one spectacular future.</p><p>So, this New Year…Quit your job. Open a cat cafe. Live your best life.</p><p><strong><a href=”https://www.fox.com/call-me-kat/” target=”_blank”>Call Me Kat</a> premieres on FOX Sunday, January 3rd after NFL and continues on Thursdays beginning January 7th at 9/8c. Starring Mayim Bialik, the show is about a 39-year-old woman who quit her successful, yet unfulfilling, job to pursue her dreams to open a cat café. Kat couldn’t be any happier with her new life… despite her mother pushing Kat to get married already!</strong></p>