Carcinization is an example of convergent evolution involving decapod crustaceans eventually evolving into a crab-like organism. In October 2020, the term became a popular discussion over the internet, spawning many parodies of the evolution’s process of turning animals into crabs.

The term “carcinization,” which commonly describes morphological evolution in non-crab (Anomura) adult decapods into “false crabs,” was coined and introduced to the discussion of biological evolution by English zoologist L.A. Borradaile in 1916. Borradaile described that carcinization was “one of many attempts by nature to evolve a crab.” The process is also known as “brachyurization.”

Despite decapods of Anomura infraorder acquiring crab-like appearance during carcinization, they are not considered Brachyura (or “true crabs”), but are instead referred to as “false crabs.”

Despite being in the discussion of biological evolution since the 20th century, carcinization went largely unknown to popular and internet culture prior to October 2020. On June 25th, 2019, Tumblr user quasi-normalcy made the earliest viral post referencing carcinization. On August 8th, Tumblr user gorjus-bacon replied to the post, with user goosegoblin posting another reply on the same day (thread shown below). The thread received over 18,100 likes and reblogs in one year.

On November 8th, 2019, Redditor GTSPKD shared the post on Reddit via the r/tumblr subreddit, where it gained over 1,800 upvotes in six months.

On June 1st, 2020, webcomic artist xkcd posted a comic about the phenomenon. The comic (shown below) gained over 210 retweets and 1,600 likes on Twitter in six months.

On June 2nd, Redditor Xurkitree1 posted a Team Fortress 2 meme referencing the phenomenon that gained over 1,800 upvotes in six months.

On October 13th, 2020, Twitter user @cableknitjumper posted a tweet about her personal discovery of the carcinization phenomenon. The tweet gained over over 14,000 retweets and and 81,000 likes in one month.

Following the viral tweet, carcinization became a popular subject of online discussions and memes. On October 28th, 2020, YouTube channel PBS Eons posted a video about the phenomenon. The video (shown below) has accumulated over 3.2 million views as of November 14th, 2020. 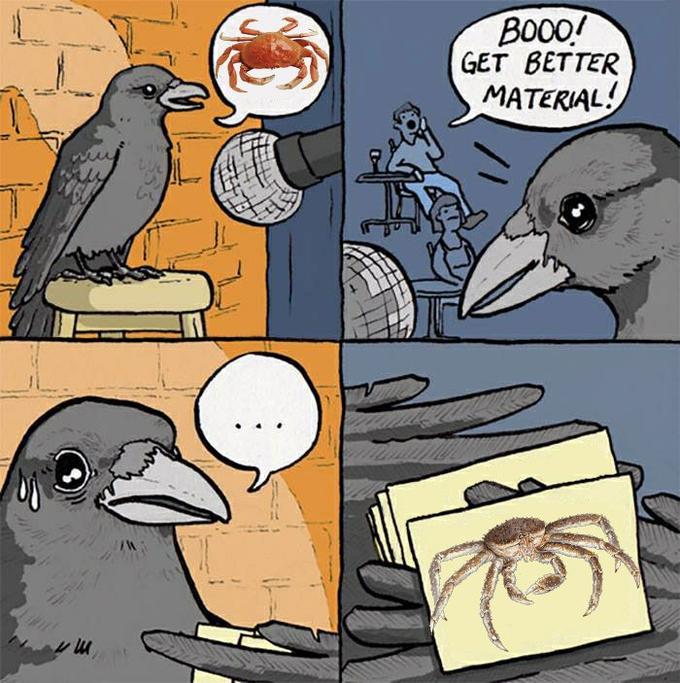