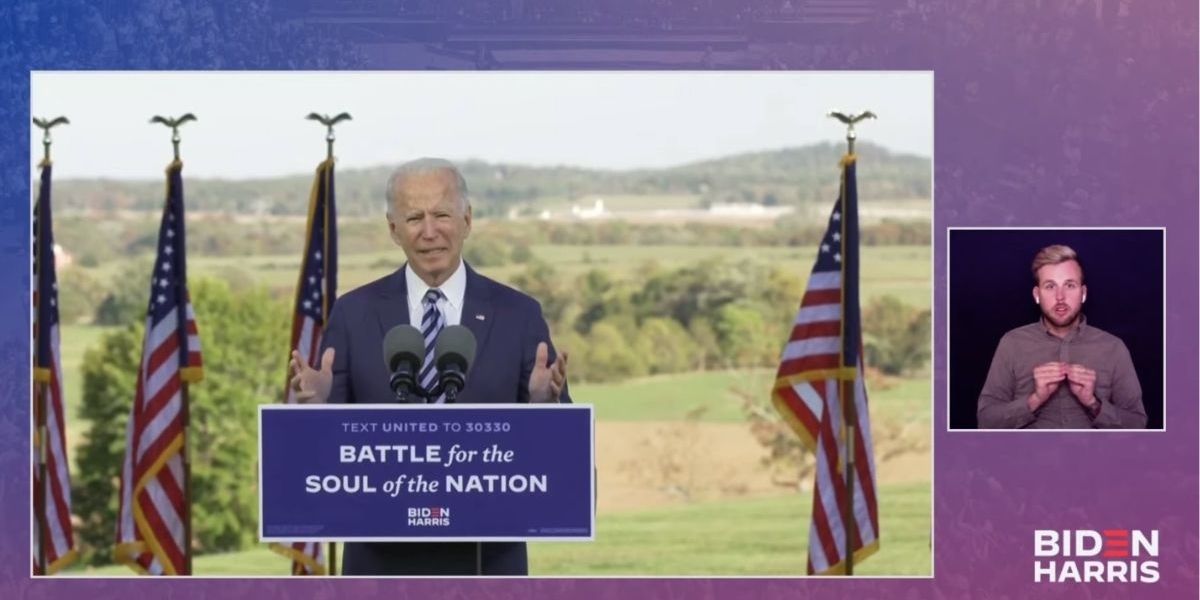 Something extraordinary happened at Gettysburg yesterday. Due to the insane news cycle and the constant stream of COVID diagnoses coming from the White House, it got a bit buried in the media, but it shouldn’t have. I’m not sure I’ve ever seen anything like it.

We expect presidential campaign speeches to be inspiring, and Biden’s speech at Gettysburg fit that bill. Truly, it’s one of the best political speeches I’ve heard yet. But what made it extraordinary wasn’t just what he said, but what he didn’t say.

In a speech on the campaign trail, less than a month before an intense election, Joe Biden didn’t mention his opponent. The name Trump wasn’t spoken once during his entire 25-minute speech. He didn’t speak about the current president at all. Instead, he explained the kind of president he will be—not just for members of his own party, but for all Americans.

How novel. And what a refreshing break from the ugly vitriol that so often marks this stage of a presidential campaign.

Joe Biden’s Gettysburg speech is probably the best and most COMPLETE speech I’ve seen him give this year, and proba… https://t.co/waE6D1sfNJ

America is hurting right now. Our nation is riddled with division and unrest in the middle of an uncontrolled pandemic and an economic crisis. Most of us have never seen polarization like this in our lifetime, and the uncertainty of the future has everyone on edge. At the same time, many of us have watched helplessly as acquaintances, friends, and loved ones alike have fallen prey to misinformation, from unabashedly biased fringe media to full-on kookoo bananapants conspiracy theories. It feels like the fabric of our nation is unraveling.

What we need in this moment is genuine leadership. Someone who can pull us back to the big picture and call us to our core values. Someone builds bridges and remind us that, regardless of ideology or party, we are Americans first. Someone who can dissolve tensions rather than stoke them, who doesn’t divide the United States into Red States and Blue States and fan the flames of such political divisions.

Whatever your political persuasion, the message in Biden’s speech is the one we all need to hear right now.


LIVE: “Battle for the Soul of the Nation”- Joe Biden Speech in Gettysburg, Pennsylvania

People shared parts that stood out to them on Twitter. Here are a few highlights (but I highly recommend watching the whole thing—these quotes only scratch the surface):

“I think about what it takes for a Black person to love America. That is a deep love for this country that has — fo… https://t.co/R8avcFFXnx

“Think about what it takes for a Black person to love America.” – @JoeBiden

Joe Biden in Gettysburg: “this pandemic is not a red state or a blue state issue. It effects us all. It’s a virus.… https://t.co/yK7ncZ9dJS

“We need to revive the spirit of bipartisanship in this country. I’m running as a proud Democrat, but I will govern… https://t.co/nhn49GCXBk

“Instead of treating each other’s party as the opposition, we treat them as the enemy. This must end. We need to re… https://t.co/kBxTpzzxaf

We need a truly unifying message—one that doesn’t come from a blatantly partisan perspective or serve only to unite one candidate’s base. That unifying, presidential message came from Joe Biden yesterday at Gettysburg.