Adele’s Notting Hill Carnival Photo refers to a picture pop singer Adele shared on her Instagram in which she is dressed in a Jamaican-flag bikini and has her hair in bantu knots. The post was intended to lament the cancellation of the UK Notting Hill Carnival, which celebrates the country’s Caribbean and Black communities, due to the coronavirus pandemic. It was widely mocked online for perceived cultural appropriation, with people making jokes imagining Adele songs as dancehall and reggae tunes.

On August 30th, 2020, Adele posted a picture to her Instagram of herself in a Jamaican-flag bikini with her hair in bantu knots. The image gained over 4.3 million likes in less than 24 hours (shown below).

The picture quickly spread on social media as people poked fun at Adele, joking that the picture leaned more into the territory of cultural appropriation instead of appreciation. Many joked that the pictures were part of ongoing 2020 exhaustion. For example, user @FredTJoseph joked, “Black people have been through enough in 2020” before showing the picture, gaining over 700 retweets and 5,900 likes (shown below, left). User @theferocity made a similar joke, commenting, “this year just won’t let up,” gaining over 410 retweets and 8,500 likes (shown below, right).

Others made jokes by quoting Adele songs but wrote lyrics as though they were spoken with a Jamaican dialect. For example, @Jaboukie tweeted, “nuh bodda. mi will find sumadi who come in jus like you,” gaining over 3,800 retweets and 34,000 likes (shown below, left). User @301mair joked, “Adele said she was Rolling Pon De Deep,” gaining over 1,400 retweets and 7,800 likes (shown below, right). Jokes were covered by Junkee, E!, and Buzzfeed. 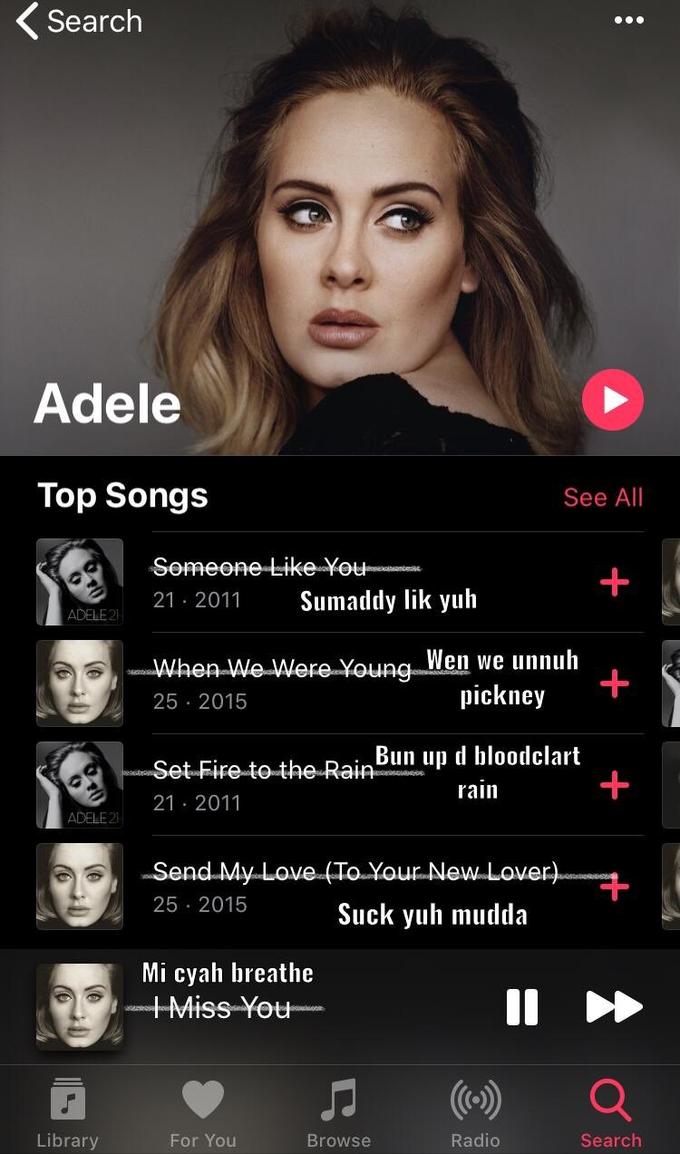 Mahomes annihilated Lamar Jackson’s Ravens, it was a shock to the system — Skip | NFL | UNDISPUTED

Twitter’s Photo Algorithm Has Been Cropping Out Black People

How to add custom photo Widget on iOS 14

Mahomes annihilated Lamar Jackson’s Ravens, it was a shock to the...

The Debate Section On "Race And Violence In Our Cities" Had...