The Georgia Guidestones, AKA the “American Stonehenge,” are a massive granite structure in far eastern Georgia near the South Carolina border. No one knows who paid for their construction, nor what exactly is meant by the strange messages engraved on them.

1. The Georgia Guidestones are almost twice as tall as Stonehenge.

2. Nearly a quarter-million pounds of granite was used to make them.

3. Here are the 10 messages that are inscribed on the granite slabs: 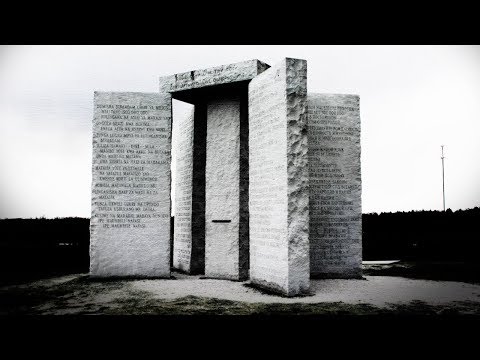 4. These ten “messages” are written on the Guidestones in eight different languages.

5. No one knows who paid for their construction.

As the story goes, an elegant, well-spoken, well-dressed, and grey-haired man who identified himself only as “R. C. Christian” appeared at a granite company in nearby Elberton, GA one day requesting a quote on the project. Figuring he was some “nut,” the granite specialist purposely claimed a ridiculous price, figuring Mr. “Christian” would balk. Instead, Mr. Christian agreed to the price.

6. Some people suspect the Rosicrucian Order financed the project.

Since “Rose Cross Christian,” AKA “Christian Rosenkreuz,” was the founder of the mystical society the Rosicrucian Order, many suspect that the Rosicrucians were financed the building of the Georgia Guidestones.

7. Others suspect that Ted Turner financed the project.

Since Ted Turner of CNN fame is located a mere 100 miles away in Atlanta, and since many of his stated globalist goals reflect the Message of the Georgia Guidestones, it has also been suggested that he is the mystery patron behind the giant granite slabs.

8. The project’s builders’ had to sign a legal agreement never to reveal the identity of the financiers.

They also swore to destroy all legal papers regarding the Guidestones’ construction once the project was finished.

9. The “Message of the Georgia Guidestones” seems to call for at least 90% of the Earth’s population to be wiped out.

The passage about maintaining humanity at a population of a half-billion or less would require a massive dying-off of humanity the likes of which we’ve never seen. This is what has led many conspiracy theorists to allege that whoever financed the Guidestones, they are in cahoots with an evil New World Order project to extensively depopulate the planet.

Apparently The Beatles widow is fine with seeing 6.5 billion humans wiped out.

The spray-painted message was DEATH TO THE NEW WORLD ORDER.

Whoever paid an astronomical sum to build a giant set of tombstones calling for massive depopulation, a single world language, and a World Court definitely didn’t see a use for national borders.

13. The Guidestones were designed to withstand catastrophic events.

Events such as, oh, a World War that wiped out 6.5 billion people. As the world lay in ashes, somewhere R.C. Christian and his cohorts could take a little comfort that at least their giant creepy tombstone was still standing way out in rural Georgia.

14. Some claim they are Satanic in origin.

This includes right-wing pundit Mark Dice, who claims they are of “a deep Satanic origin” and that R. C. Christian was a member of “a Luciferian secret society” with ties to the “New World Order.” Others have referred to the ten messages inscribed on the Guidestones as “The Ten Commandments of the Antichrist.”

15. Others claim they were intended to be seen by the survivors of a nuclear war.

Since the Georgia Guidestones were built in 1979, at the height of the Cold War between the USA and the Soviet Union that many thought would inevitably result in a nuclear apocalypse, writers such as Brad Meltzer suggests that the Guidestones were meant to be seen by that war’s survivors, at which point the world’s population would already be below a half-billion.

16. A mysterious “Time Capsule” is allegedly buried nearby.

A tablet erected near the Guidestones claims that a time capsule is buried beneath the tablet, although there is no proof the capsule really exists and no suggestion of what is written on it.

17. R. C. Christian presented builders with a shoebox containing a wooden model of the monument along with 10 pages of extremely detailed specifications.

Many of the specifications involved using the Guidestones as an astronomical guide, as explained in the next few items.

18. The Guidestones were purposely designed to track the sun’s east-west migration year-round.

19. During an equinox or solstice, those who stand at the west side of a “mail slot” carved into the Guidestones can see the sunrise over the horizon.

20. The four outer stones are positioned to mark the limits of the 18.6 year lunar declination cycle.

21. An eye-level hole drilled into the center stone permits viewers to locate the North Star.

22. A small hole drilled through the capstone serves as a sundial.

At noon every day, a reading of where the sunbeam hits the center column allows one to pinpoint the exact day of the year.

In a small gesture of generosity, the mysterious backers of the Georgia Guidestones still permitted the owners of the land on which they were built to allow their cattle to graze on it for their entire natural lives—or until a nuclear war that wipes out 90% of the world’s population, whichever comes first.

25. The Georgia Guidestones have been called “America’s Most Mysterious Monument.” 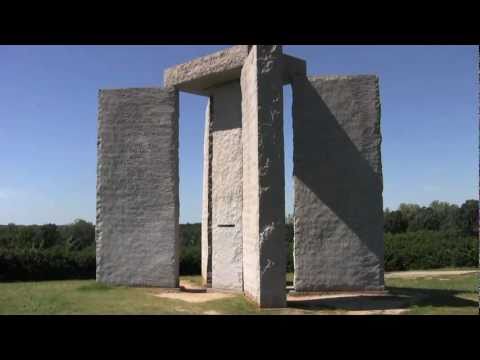 Four years later, police arrested William Jeremy Ellis in the middle of the night as he was trying to replace the cube of granite he’d stolen. He explained to police that he “didn’t want that weight anymore.”

27. A tablet in front of the monument declares “LET THESE BE GUIDESTONES TO AN AGE OF REASON.”

It’s kind of hard to be reasonable when you’re talking about wiping out 90% of the planet’s inhabitants, no?