We’ve scoured the web and found some of the scariest real ghost photos and pictures out there.

Snapped in 1963 at the Newby Church in Yorkshire, England, this photo appears to depict a spooky nine-foot-tall figure wearing a cowl and standing at an altar. Several photo experts have scrutinized the photo and have declared it is not the result of a double exposure or other photographic tricks. (source)

One of the most famous unexplained ghost pictures of all time, England’s legendary “Brown Lady” was captured on film by photographers from Country Life magazine in 1936. There had been numerous sightings of the “Brown Lady” going all the way back to 1835. (source)

This blood-chilling phantom was captured at night on a smartphone in 2008 in the town of General Guemes, Argentina. The event was captured as video—if you want to scare the living bejeezus out of yourself, watch it and listen to the cameraman, Jose Alvarez, screech in terror when he realizes the gnome is jumping around: 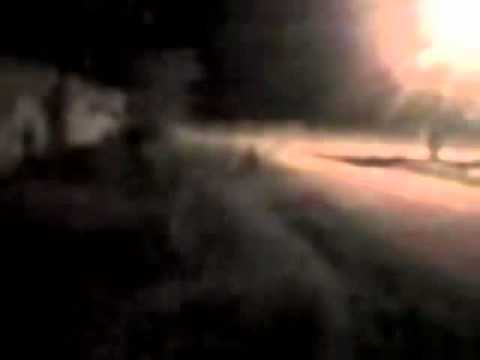 Bachelor’s Grove Cemetery near Chicago is reportedly the site of several paranormal events. This 1991 high-speed infrared photo depicts a phantom woman sitting on a tombstone. (source)

This undated photo, presumably from the 1950s, shows Mama Cooper, Grandma Cooper, and two kids smiling at a dinner table. It also depicts what appears to be a corpse hanging from the ceiling. (source)

Actor Ike Clanton got all gussied-up one day in a cowboy outfit to have his picture taken at the Boothill Graveyard in Tombstone, Arizona. He probably hadn’t been planning to share the spotlight with a fedora-wearing ghost figure in the background. (source)

This haunted house in Amityville, NY was the subject of massive publicity in the 1970s that eventually led to the film The Amityville Horror. Photographer George Lutz was sent out in 1976 to take pictures of the house, but it wasn’t until he was looking over rolls and rolls of film in 1979 that he discovered one—and only one—photo depicting a small ghostlike boy. (source)

Taken by a woman named Mrs. Andrews sometime in the 1940s in Queensland, Australia, this photo clearly shows an infant sitting at a gravestone and looking at the camera. Mrs. Andrews was visiting her teen daughter’s grave. She said she had no idea who the phantom baby is, though. (source)

Ghost photos taken in cemeteries have an added level of creep factor. This one was snapped by Mrs. Mabel Chinnery in 1959 while visiting her mother’s gravesite. It depicts her husband waiting in a car. According to Mrs. Chinnery, it also depicts her dead mother sitting in the backseat. (source)

Photographer Neil Sandbach took a series of photos at an English farmhouse in 2008. Later while examining one of the photos on his computer, he noticed to his horror that there was a spectral image of what appears to be a young child. (source)

What was intended to be an innocent color photo of Denise Russell’s grandma in 1997 also shows a man behind her who bears a striking resemblance to grandma’s husband, who had been dead since 1994. (source)

This photo depicts England’s Wem Town Hall burning to the ground in 1995. It also appears to depict a girl staring blankly at the camera from within the building. (source)

Snapped in Manila in 2000, this shot reveals two smiling Filipinas—as well as a creepy specter grabbing one the girls’ arms. (source)

Robert A. Ferguson was speaking at a Spiritualist convention in LA in 1968 when this picture was taken. Standing behind him appears to be his brother Walter, who had died in 1944. (source)

After two sailors died onboard the S.S. Watertown in 1924, other shipmates said they repeatedly saw their faces appearing in the water. This photo appears to show their heads emerging from the sea. (source)

All that is known of this photo is that it was taken in Chicago and shows a happy mother and her son. It also seems to show the ghost of an old woman and a bulldog staring at the camera through the door. (source)

Freddy Jackson was a member of the British Royal Air Force whose funeral was held the same day in 1919 that this photo of his former comrades was taken. If you look at the inset to the right, a face that has been identified as Jackson’s lurks behind another soldier. (source)

My, what a very nice photo of a lovely Queen Anne-style wooden bureau taken sometime in the early 20th century! Everything’s nice, that is, except for the unexplained phantom hand at the top. (source)