When we look at gorgeous people of the past, we don’t even think about the price they paid to look great. Fashion trends were expensive (like today), physically hard, and even dangerous.

Bright Side has found some examples that prove that the term “fashion victim” isn’t accidental.

Nowadays, we have the opportunity to buy clothes of all possible colors or dye them manually. In the past, there were not many options and bright dyes were extremely expensive and even toxic. For example, this nice green Victorian dress was harmful to whoever was wearing it because its dye contained arsenic and copper sulfate.

But nothing could stop people of the past and that hideous Paris green was used as a pigment for dyeing clothes and even wallpaper. It was also used as an insecticide later — in the picture, you can see a worker mixing Paris green and road dust to dust the breeding spots of mosquitoes during World War II.

A metal hoop isn’t dangerous itself, but there was always a chance that a woman could get stuck in the doorway. The main danger was hidden in the fabrics that covered the crinoline.

The thing was, women sometimes wouldn’t notice that they’d stepped too close to a fire grate and their dress would catch on fire. Since some fabrics were extremely flammable, the consequences were really sad.

This horrifying tradition was really popular in China up to 1911 when it was finally banned. The feet of young girls (mostly from noble families) were tightly bound modifying the shape of their feet. As a result, feet stopped growing normally and resembled lotuses. This was considered to be really attractive.

Women literally turned into handicapped people since they couldn’t even move without help. Instead, they had excellent chances of getting married. And even though the custom was forbidden, some women managed to still practice lotus binding and some of them are still alive. 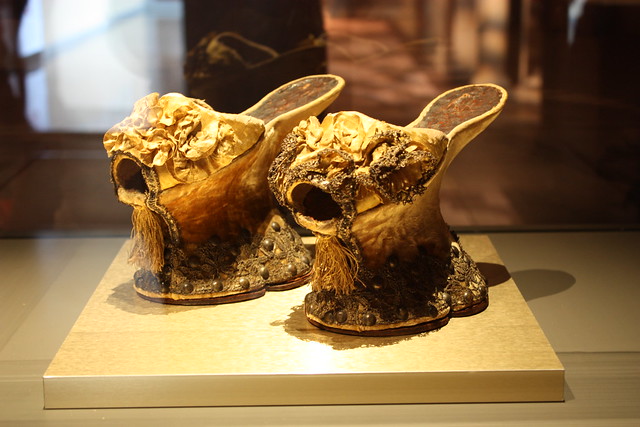 Even the highest modern heels look harmless in comparison to Italian chopines. One of the reasons why these shoes might have been invented was because of mud on the streets that noble people didn’t want to step in.

As time went by, this trend spread all over the Europe and the chopines’ height increased so much that women couldn’t walk without the help of a servant.

Even though everyone knew about the toxic properties of belladonna, noble European women weren’t afraid to use belladonna drops. These drops caused pupil dilation and made eyes looked brighter. Regular use often caused eye problems and even blindness but this fact didn’t stop people.

Porcelain white skin was incredibly popular among noble people who used lead makeup to whiten their faces. The main side effects were: bad skin, hair loss, and intoxication that could lead to death. Some types of blush also contained arsenic. So it’s no surprise that women only managed to live to be 30 back then.

In the past, women used to spend much of their pregnancy in a maternity belt. These girdles were nothing like the modern, comfy panties and belly bands that provide great support. Maternity belts of the past resembled 19th century corsets. They were heavily boned, zippered, completely uncomfortable, and even painful.

Being uncomfortable for fashion’s sake does not exclude men. In the 19th century, stiff collars were extremely popular. Studs were used to attach a collar to a shirt. This accessory was so stiff that it caused blood circulation problems and asphyxia. That’s why it was also called the “father killer.” The New York Times even published an article about a sad consequence of wearing one of these.

During the Rococo movement, women’s hairstyles became incredibly high and intricate. This usually meant that women had to wear the same hairstyle for several days which caused hair loss and skin issues. Additionally, different bugs and rodents would try to use these hair constructions as nests. Because of this, women had to walk and sleep wearing big metal cages to protect their hair.

After the French Revolution, women started to wear light, low-cut dresses without undergarments. Gowns were often made of muslin, a type of cotton fabric, which is how the term “Muslin disease” appeared. Women didn’t even want to put on warm clothes during severe weather, and would catch a cold or even die sometimes.

Corsets deformed the skeleton and displaced the internal organs. But people thought they were actually good for the body. Women used to wear them from childhood and didn’t take them off even during pregnancy.

One of the weirdest examples of a corset is the snake corset, invented by La Sylphe, an American dancer. We don’t really think it was good for the spine. Fortunately, modern corsets don’t affect our body and health to that extent and it’s up to us to decide whether we want to wear them or not.

Which trend was the strangest? Share your thoughts with us in the comments.